Having never played in the Crystal Bowl tournament before this year, it helped Shelli Bitter and Jenny Brallier that they were at least familiar with the site for this year’s event.

Bitter and Brallier – Killer B’s? – teamed up to win the Flight One Best Ball Gross portion of the 2022 Crystal Bowl on August 9 at Summit Hills Country Club. They finished with a 5-over 76, one stroke better than the teams of Holly Jones and Kathie Kuzma from O’Bannon Creek Golf Club and Nancy Decenso and Patricia Dunn of Terrace Park Country Club.

“That’s our home course,” Brallier said. “Actually, it was gorgeous day. Knowing the course helped. Shelli and I have played in many events together at the club, but we had never played in the Crystal Bowl before. It was a unique experience.”

Flight Two finished under the same circumstances. The team of Janel Carroll from Kenwood Country Club and Melissa Gilmore out of Western Hills Country Club earned the Best Ball Gross championship with a 15-over 86. They also finished first with a 5-under 66 in the Net competition, but the Hamilton Elks Golf Club twosome of Sue Chow and Paula Gresham claimed the championship with a 2-under 79, one stroke better than the Kenwood duo of Judy Pershern and Liberty Magarian and the Triple Crown Country Club team of Evelyn Floyd and Rita Brick.

The Crystal Bowl tournament was the conception of one of Cincinnati’s pioneers in women’s golf. Martha Parker Wilson came from a golfing family, won the Camargo Club Championship in 1951 and 1952, and played in the city championship from 1937 to 1957. She was a devoted member of the GCWGA, serving on the Board from 1949 through 1951 and again in 1956 and 1957. At the fall meeting of the GCWGA in 1951 she suggested that a two-golfer team from each club playing in a best ball tournament would be “interesting for the 1952 season.” The tournament was a success, was named the Crystal Bowl in 1957 and has grown into one of the GCWGA’s more popular events. 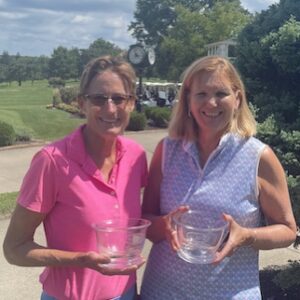 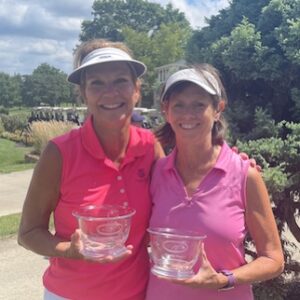 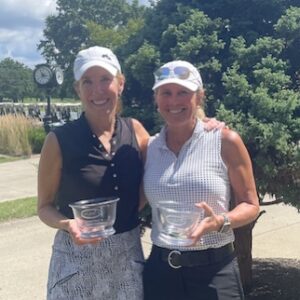 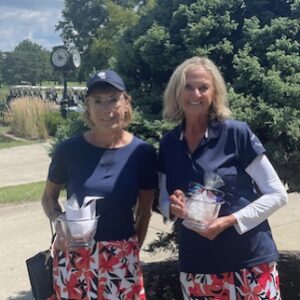 Unlike the Bitter-Brallier team, Gresham and Chow were unfamiliar with Summit Hills. “We really liked the course,” Gresham said. “We had never played there. It was a little hillier than we expected, but it was in excellent condition. The food was good, too. They had a nice taco bar. Everything was well-coordinated. We finished in the normal amount of time.”

Chow actually was listed in the official results as representing Sun City Center, southeast of Tampa. “She has a winter home there,” Gresham explained. “She lives here. She spends all summer up here. A lot of people do double listings. We actually met playing a nine-hole league 25 years ago.”

Playing on their home course paid off for Bitter and Brallier in more than just their performance. They were able to get a sneak preview of the results. “We didn’t know we’d won until we were in and having lunch,” Brallier said. “I’m on the board of directors at Summit Hills and the general manager came up and said, ‘I have some inside information. I just saw the results and you and Shelli won.’ We didn’t really know we’d won. We had no idea how the other people played.”

Brallier credited her partner with carrying the team. “Shelli’s a more solid player than me – four or five strokes better,” Brallier said. “She had two birdies. Those two key birdies really helped. I just basically ham-and-egged it.” Gresham credited consistent play with her twosome’s title. “I think it was we didn’t blow up on the same holes,” she said. “We took turns holding it together.”

They were more surprised than Bitter and Brallier to learn that they’d won. “It was really kind of last minute, when they started giving out prizes,” Gresham said. “You just don’t know. They’re just making announcements. You never know how they’re going to score playoffs. There were tight numbers all over the place.”