University of Kentucky sophomore Marissa Wenzler came from behind on the second day of the two-day, 36-hole medal-play tournament to edge future UK teammate Laney Frye by two strokes at the par-72 Wetherington Golf and Country Club. The competition didn’t escape UK’s notice. This was posted on the women’s golf team’s Facebook page: “We’re out here collecting trophies this summer.

“Marissa Wenzler won the 105th Metropolitan Women’s Amateur Championship June 10-11, in West Chester, Ohio. And guess who finished just behind her in second? Incoming freshman Laney Frye. “Laney led after the first round but Marissa carded a 4-under-par 68 in the final round to win at 5-under par. Laney finished at 3-under par.

“Remember, Laney won The Dye Junior Invitational a couple of weeks ago. “Our girls are off to a great start this summer. We (blue heart emoji) our team!!!” “It was a lot of fun,” Wenzler, a Centerville High School graduate who plays out of NCR Country Club, said two days later. “Laney and I talked about it. We both knew we wanted to beat each other. Those are the kinds of competitors we are. She’s going to be a great addition to the team. I’m excited to see her at Kentucky.” Fifty-three women converged on the West Chester course for the June 10-11 medal-play event. 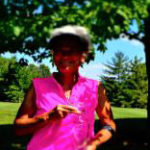 Mile of Golf Player’s Club’s Sarah Willis finished third overall with a 73-72 – 145, good enough to win the First Flight championship. Maketewah’s Bree Wilson won Flight Two with an 81-80 – 161, four strokes better than City of Mason Golf Center’s Demi Xie. Wenzler focused on soccer for much of her youth before turning to golf, following in the footsteps of her brother Ryan, who has played PGA Tour events. “I did not like golf while I was playing soccer,” she said. “I thought I’d be a pro soccer player, but as I got older, the sport wasn’t as fulfilling. I picked up golf and got good at it, and I thought, ‘If I can get good at it, why not?’ That was a game-changer for me.”
She felt that her recent focus on putting paid off in the Met. “Mentally, that’s always been the thing that kind of held me back,” she said. “I feel like it kind of all came together in this tournament. You can drive it down the fairway all you want, but if you can’t make putts, it doesn’t matter.”

Wenzler’s only previous exposure to Wetherington was in a couple of practice rounds the week before the tournament. “I loved it,” she said. “I thought it was great. The conditions were awesome, and the greens were super smooth.”

Restrictions imposed by the COVID-19 pandemic had Wenzler looking for opportunities to compete, and when a friend suggested the Met, she decided to enter. “A lot of the bigger events had been cancelled, and when my friend sent it to me, I thought ‘This is perfect,’” she said. Wenzler finished the first day at 1-under par 71, tied with three other women at one stroke behind Frye, a Lexington, Ky., native listed as playing out of California Golf Course. “That first round, I was struggling to hit it close,” said Wenzler, who won the tournament in her debut appearance. “I wasn’t hitting the fairways. The wind made it really difficult.” She was able to capitalize on the second day’s more favorable conditions and finished with pars on two of the last four holes while Frye was posting bogeys on each of the last four holes.

Wenzler didn’t clinch the championship until she two-putted for par on the 18th hole. “I think the weather was a little bit of a help, for sure,” she said. “Honestly, I think the main drive was just the competition Laney and I had for the last couple or nine or 15 holes. We just thrived off the competition. “It came down to the last hole. A lot of us in our group struggled going into the last couple of holes. I knew I had to two-putt to make sure I was going to win. She expects to return next year to defend her title, but she admits that she’d prefer to see the Met revert to the its previous format of medal play to determine match-play flights. The format was changed last year to two days of medal play. “My first match play was last summer, and it was scary,” she said. “It’s different than stroke play. You’re playing against your competitor, not against the course. It was a lot of fun.