For a team that was hastily thrown together playing on an unfamiliar course, the foursome of Ashley Keating, Maria McLaughlin, Lee Stephens and Erin Barney did fairly well at the 2022 Low Kent Memorial tournament. 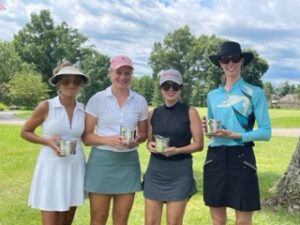 Playing at Miami View Golf Club on the makeup date of August 1, the makeshift crew weathered a half-hour lightning delay to win the Low Net championship by two strokes

“It’s kind of a fun story,” Keating, a Cincinnati Country Club member with McLaughlin, said. “We were kind of a cross-city team. The real story is a woman who’s a friend of mine reached out to me and asked me if I could put together a foursome, I said, ‘Yes. I know this person and that person.’ Then one of the players got Covid two days before the tournament, so Maria stepped in.

“We kind of put ourselves together.” Stephens plays at Maketewah Country Club, while Barney plays at Losantiville Country Club. “Only two of us knew each other, and we had never played together,’ Keating said. “We had a great time.”

Un Ae Mueller’s team had a similar story. The Four Bridges Country Club member was planning to play with the same team that won the Low Kent Gross title two years ago, but the postponement from July 18 led to two players having to bow out. They were able to add Deanna Hagenkamp and Cathy Almquist and didn’t miss a beat, edging by one stroke the team of Kate Lameier, Trish Doyle, Rachel Hummel and Emily Stallo.

“They were good candidates,” Mueller said. “Deanna played at Mason High School and Wittenberg University, and she’s a teacher at Mason. She happened to be open and loves to play. Cathy has played for 45 years. She played at Ohio State from 1985 to 1989.”

The Low Kent and its counterpart, the High Kent, were created in the mid-1950s in honor of Mrs. Sydney B. Kent, a long-time Cincinnati Country Club and Women’s Western Golf Association board member who maintained in her life a keen interest in teaching ethics, courtesies and rules of the game to junior golfers. The tournament originally was a net best-ball foursome before evolving into flighted events at two different courses with gross and net prizes. The Lameier-Hummel-Doyle-Stallo team endured some hard luck. Besides falling a stroke short in the Low Gross scoring, they tied Mueller’s team for second by two points in the Low Net standings. Ironically, Lameier and Hummel were playing their home course, while Doyle and Stallo play nearby at Western Hills Country Club.

“I was really kind of shocked,” Mueller said. “I didn’t think we would win. We were eating lunch and one of the ladies went out and looked at the scoreboard and came back and sat down. She had kind of a white face. She said, “Have you looked at the board?’ I said, ‘No.’ She said, ‘I think we’re in first place. You might go check it out.’ I said, ‘We’re in first place? Really?’”

Mueller’s team actually might’ve clinched their title much earlier than they realized with Hagenkamp’s eagle on Miami View’s No. 4. “It’s elevated, so we couldn’t see the green,” Mueller recalled. “When we saw it went it, we were screaming, ‘Oh, my God.’ It was something to see. We were thinking we had a better chance – not at first, but maybe second. “We got off to a very slow start. We were saying, ‘Let’s just go and have fun. Don’t worry about it. Just go and play your game.’”

Keating’s team was similarly surprised to come out on top. “We were one of the last groups in, and we added up the scorecard,” she said. “Actually, two of of them were about to leave. There’d been rain and we’d been delayed. I looked up at the board and said, ‘Guys, I think we’re in the lead.’ They couldn’t leave. We couldn’t let them. They had to stay so we could accept the trophy.

“I was the one who added up the scorecard. I said, ‘We might be in the top three.’”

“The weather wasn’t good, but we pulled through. Maybe that was the reason everybody didn’t play their best game. I don’t know how we did it, but we did. “We started off on the eighth hole. It would’ve helped to have played there before. Maybe it was dumb luck. “I think we showed a lot of character.”