What We Learned At 101st Women’s Met
By Marc Hardin

One of the many enduring beauties of the Greater Cincinnati Women’s Metropolitan Amateur Championship golf tournament staged annually by the GCWGA is that splendid play can come in many shapes and sizes, at any age at any time.

In this summer’s power-packed field at the 101st Women’s Metropolitan at Western Hills Country Club, teenage winner Katie Hallinan and runner-up collegiate Katie Tomassoni represented the long and short of it in more ways than one in the dramatic all-Katie match-play final.

The younger but more powerful Hallinan, 16, outdrove Tomassoni by as many as 50 yards. Yet the 5-foot-10 Walnut Hills High School rising junior needed every saved shot possible during a remarkable final round to hold off the plucky 5-foot Tomassoni from Mason High School and Tusculum College.

What the 10th-seeded Tomassoni may have lacked in consistent driving length, she more than made up for with a steady short game, unfettered focus and pure moxie. Hallinan, the top seed representing Majestic Springs, lacked experience compared to Tomassoni, from Harmon Golf Club, but compensated with mind-blowing escapability, especially on the final two holes of the final when she converted errant drives into how’d-she-do-that recovery shots that won her the tournament, 1-up.

A day earlier in the quarterfinals and semifinals, former Met champion Cathy Almquist made a mockery of the age gap between she and the youngsters who survived and advanced to the championship match. Hallinan, 32 years Almquist’s junior, was pushed to the brink by the former Ohio State golfer before prevailing, 2-up. It was all-square after 10 holes in Almquist’s tournament return after a few year’s inactivity. At the Women’s Met, you can expect the unexpected. But nobody was surprised that the former champ was once again in hot pursuit of another Met crown against a much younger field. 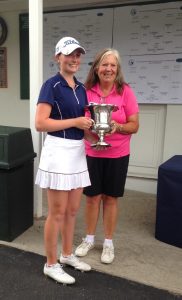 Here are some additional takeaways as we have a final look at the 101st Women’s Met:

YOUTH SERVED WARM: Hallinan’s victory continued a recent trend and followed Hanna Lee’s win last year when the Xavier University golfer defeated 15-year-old junior champion Fai Khamborn in the final of the 100th Women’s Met. It was the tournament’s second 16-year-old winner in eight years (Emily Wright, 2009). The last over-40 champion was Almquist in 2008. Every winner but one since then has been college-age or younger. Fittingly, this year’s finalists praised the play of their elders while the ladies were highly complimentary of the girls.

AGE MERELY A NUMBER: A young veteran, former tournament champ Allison Schultz, also put up a fight while representing the older vanguard. The former Toledo golfer gave Hallinan her toughest match before losing in 20 holes in the quarterfinals. Hallinan was 2-up after 16. Undaunted, Schultz won the next two, squaring it up and pushing the match to extra holes.

HALLINAN’S HOPES: Unwilling to take a back seat to no one, the youngster dropped a hint that the tournament may be hers when she routed reigning Ohio prep big-school champion Kellen Alsip 5 and 4 in the first round of match play. Hallinan was state runner-up to Alsip. The Walnut Hills standout is the top returning girls’ high school golfer in Greater Cincinnati and a favorite to win the individual state crown this fall.

TOMASSONI’S GRACE: She already was expecting to take a beating from Hallinan on tee shots in the final, but Tomassoni showed sportsmanship instead of gamesmanship and was confident enough in her play that she permitted Hallinan to use a shared coach as her caddy. Local PGA pro Kevin O’Sullivan coaches both girls. Having already caddied for a Met winner in Wright, he offered his services if either Hallinan or Tomassoni made the final. When both advanced, O’Sullivan kept his promise, but only after receiving a blessing from Tomassoni, who had her boyfriend, a college golfer, on the bag. O’Sullivan caddied for Hallinan and the rest is history, but Tomassoni’s decorum was nothing but elegant.