Competing for a cause while playing for fun in a group among friends with a team championship on the line is about as good as it gets for local amateur golfers. In that sense, the Sept. 12 GCWGA Scholarship for Higher Education Championship Tournament had it all during the ninth staging of the event at Blue Ash Golf Course.

The cause takes its shape in the form of promoting and funding the GCWGA Scholarship Foundation which for the second year in a row this summer awarded $1,500 one-time-only scholarships to 10 high school senior girls with an interest in golf. A total of 72 scholarships have been awarded over the last nine years to young ladies wishing to continue their education in college.

The fun, complete with a cookout, awards ceremony, raffles and silent auctions following golf, brought together dozens of women from member clubs.

The traveling trophy, the SHE Cup, is a coveted prize because more than one person and much more than a team and a member club become winners in a shared journey that culminates months of playing and qualifying over the length of the season. 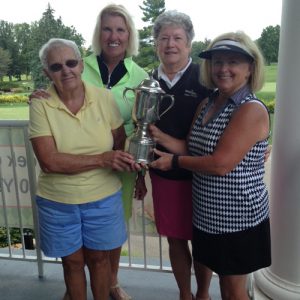 “It was a beautiful day at Blue Ash on Monday and we had a successful tournament,” said GCWGA Scholarship Foundation board chair Georgianne Koch. Tournament co-chairs are Laurie Funch and Robin Kofler. “We had 20 clubs participating. The silent auction and raffle were our most successful to date.”

Qualifying team members for O’Bannon Creek at the four-ball, stroke play competition were Carolyn Wethington, Connie Seeskin, Lovette Vuotto and Lina Stokes. Scoring was based on two net best balls of four. Each of the participating clubs determined its four lowest qualifying players at GCWGA Foundation Day Net Tournaments. Those low net qualifying events set the SHE Tournament field at 80. 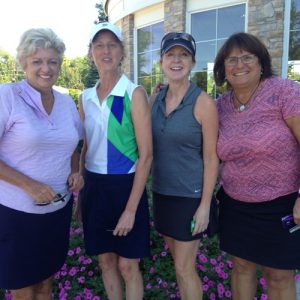 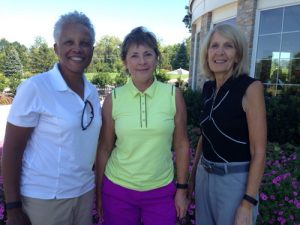 Ivy Hills qualified a pair of past and present GCWGA executive board presidents with past president Diana Oberschmidt and current leader Gloria Landry, plus Marilyn Miller and Linda Leigh-Ross. 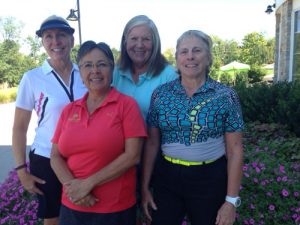 Ivy Hills came up a bit short in its quest for a second SHE Tournament championship in three years and third overall, but Oberschmidt said the cause, the fun and the chance to win a team title eventually outweighed the fleeting disappointment of failing to take home the ultimate prize.

“We had perfect weather, and I thought everything we did was successful. The SHE Tournament committee did a spectacular job. Everybody was so happy to be there,” Oberschmidt said. “I’ve been lucky to play several times and I really enjoy it. Knowing it raises money for the scholarship fund makes it even nicer.”

Regarding yet another team title, there’s always next year for Ivy Hills, as well as the rest of the non-championship member clubs. This is an event that has gained plenty of steam since TPC Rivers Bend captured the first team tournament crown in 2008.

Koch said this week’s gross raffle and auction receipts exceeded $5,300, a significant boost over last year’s total. Net revenue for the day exceeded last year by nearly 10 percent. Foundation Days at member clubs has generated another $5,100 with more expected to be added.