Linda Coffey really can’t put her finger on why her Hamilton Elks squad has become THE standard for Division I Spring Team competition.

“I don’t know,” the team captain said. “We just show up and play well, I suppose. We are just steady golfers.”
Hamilton Elks has reached a level not approached in the Greater Cincinnati Women’s Golf Association since Kenwood Country Club won seven straight Spring Team Division I championships from 1987 through 1993. Hamilton Elks never finished lower than third out of six teams and logged two first-place finishes to hold off Miami View and capture by a 10-point margin its seventh division championship in the last nine seasons. 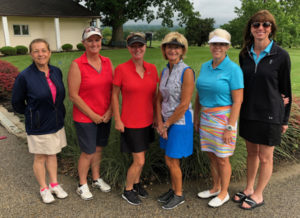 While Division I saw familiar faces holding the trophy, Divisions II and III experienced turnover. Western Hills, led by newcomer Allison Mayborg, captured the Division II title for the first time in what Laurie Brunsman said was her “five or six years” as team captain.

“I know we’ve won in the fall before, but I don’t recall as long as I’ve been doing the spring that we’ve won,” she said. “We’re real excited about it.”

Meanwhile, Summit Hills – already celebrating hosting the Women’s Metropolitan this year for the first time since 2006 – used depth to capture the Division III championship, its first since winning the 2011 Division III title, according to team captain Terri Roeding.

“It took a village,” Roeding said. “It really did. We never actually had our first six people ever. We never had a full team. It really did take a village.”

Coffey’s team of eight – including Brandi Duckwall, Julie Sizemore, Toni Soule, Jody Rusche, Stacey Hinckle, Vicki Felver and Sandy Roark – never trailed in the standings after piling up 35.5 points at Bel-Wood in the third of five rounds to take an 11.5-point lead over Terrace Park. The final margin over Miami View was short of 2017’s 31-point bulge, but it was decisive.

“We usually start at the top of the handicaps of the Elks people and start down the roster and see who’s available,” Coffey said. “We love competition.

“I have to admit this year, Toni Soule led two of the matches,” Coffey added. “She took over as captain when I had to leave. Maybe I should ask her her secret.” 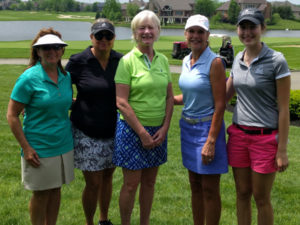 Mayborg, a district champion and three-time state qualifier at Ursuline Academy who also played at the University of Cincinnati, bolstered a Western Hills team that finished third in Division II last spring.
“She’s a 3 or 4 handicap,” Brunsman said. “That’s probably what did it. She’s new to the team and fairly new to the club. We have a lot of young members who might be ready to help in future years. This might pique more interest in years to come.”

Of course, Mayborg couldn’t do it alone. “We had a couple of people who had to fill in,” Brunsman said. “Trisha Reperowitz has really worked hard on her game. One of our long-standing members, Linda Ratterman, couldn’t play in the last match and Trisha filled in.”

“Everybody came together and pulled it out,” Brunsman said. “We had a good group of friends that played together.”
Home course advantage played a key role in Summit Hills’s rise to the top. Four Bridges led by two points after the first of three rounds, Summit Hills piled up a whopping 39.5 points in Week Two at home before clinching the title with a narrow second-place behind Oasis in Week Three.

Becky Wesdorp and Lisa Witzgall were two of several players who stepped up to fill lineup holes in the first two weeks of the short season, Roeding said. Amy Pugliano, Shelli Bitter, Jenny Brallier, Cheri Myers and Sue Averdick joined Roeding on the team that closed the deal on a 16.5-point margin – the widest of the three divisions.

Roeding gained an extra measure of satisfaction at seeing her team outscore Cincinnati and Four Bridges on their home courses. “It showed, like with basketball players, our bench was deep,” she said. “Last year, we ended up last, so we’ve made great strides.”

Fall Team play for 24 teams in four divisions is scheduled to start on September 6.