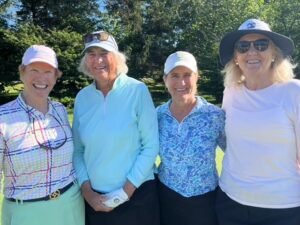 Sally Leyman felt that her Camargo Country Club team had a good chance to unseat the Hamilton Elks Golf Club squad as the perennial Spring Team Division I champions even before competition teed off.

Camargo had to negotiate an unusual route, but the team fulfilled the captain’s projection, edging Elks by 1.2 points to snap at four Hamilton’s streak of consecutive Division I championships.

“With me and Margaret Comey on the first team, I felt like if we could hold our own – win our matches by a point or tie or lose by just a point – and our second and third teams could rack up some points, that would be a key,” Leyman said. “That’s what happened.”

Camargo clinched the club’s 12th Division I championship and first since 2003 after rain, which plagued the entire seven-round Spring Team season, washed out the last round at Western Hills Country Club and led to the Greater Cincinnati Women’s Golf Association board approving an alternate scoring resolution. Each team’s scores from the previous six weeks were averaged out to create a seventh-week “score,” and Camargo “carded” a 29.1 to the Elks’ 28.9.

“I could do the math ahead of time,” Leyman said. “We had so many rain dates and rainouts that we just said, ‘We can’t keep playing.’ We had decided ahead of time on a formula that was approved by the board. We knew going in that we were going to either win it by rain or by having the right people in the right places.

competition after a break of a few years by handily winning the Division II championship. Coldstream piled up 180 points, 11.5 ahead of second-place Wetherington Golf & Country Club. 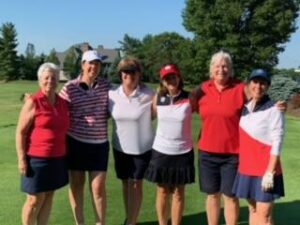 Coldstream clinched the title by scoring 36.5 points in Week Seven at Miami View Golf Club – the second-best performance of the division’s 48 rounds. Only the 40 logged by Summit Hills Country Club in the same round was better.

“I think we had some really great lineups this year,” Coldstream’s team captain said. “It helped that we had a couple of new people play for us that hadn’t played in the past. It was nice to have some depth on the roster, and at least two people played the best they’ve ever played in match play. That helped.

“Honestly, this was only the second year we’ve been back in Spring Team. We’d taken a break because a lot of the players stay in Florida or elsewhere, and COVID changed the membership. We got some new members, and we felt like we had enough women to play Spring and Fall last year. In our first year back, we finished in the middle, which was a great showing.”

Leyman credited the return to competition of players such as Comey, Mimi Gibson and Jennifer Dakers with boosting Camargo’s chances.

“That added to the depth of the team,” she said.

“She often played in the third or fourth spot or fifth or sixth,” the captain said. “She worked on her game all winter. We all agreed that she was our most improved player. She racked up points every day except one, and she came off the course shaking her head. I told her, ‘Shake it off. You can’t play well every match.’ Usually, she came off the course having racked up good points.”

Leyman suggested that Camargo might not have needed the alternative scoring method to outlast Hamilton Elks, which had won seven of the last eight Spring championships. When the two teams were matched up in Week Six, which really was the fifth week because of rainouts, Camargo came out with a 29-25 win.

“We beat Hamilton Elks head-to-head pretty handily,” she pointed out.

Coldstream ran fifth for most of the season before leapfrogging to second with a 32 at Clovernook Country Club in Week Six, one point behind Miami View. Since Miami View couldn’t score while hosting Week Seven, Coldstream was leading going into the final round.

“We struggled in the beginning, naturally, but as we played more, I felt much better,” Sheppard said, adding that the Week Seven head-to-head competition might’ve played a role in Coldstream’s strong finish.

“It was against Terrace Park,” Sheppard said. “They have a great team. I know their captain (Georgianne Koch) well. They’re always tough. I was hoping we could just push the match and get nine points, enough to finish first. I would’ve been happy with that.”

Coldstream’s team enjoyed what Sheppard described as a “happy hour toast celebration” to commemorate the championship. Camargo still was working on a way to celebrate its accomplishment.

“A few of us met for lunch that day,” Leyman said. “We have to do something.”