In at least one way, the Greater Cincinnati Women’s Golf Association Spring Team competition picked up in 2021 right where it left off in 2019. 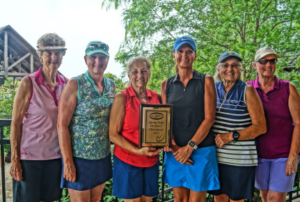 Hamilton Elks Golf Club captured its fourth straight Division I championship, shaking off a season lost to pandemic protocols and romping to a decisive 18-point win over Camargo Country Club. Elks team captain Linda Coffey was pleasantly surprised at the outcome, considering the team lost two of its top players when the Heritage Club revived its team.

“Other players stepped up,” said Coffey, whose team has won seven of the last eight and nine of the last 11 Spring Team championships. “We kind of had a pretty steady team. Our ones and twos and threes and fours were pretty consistent. Our fives and sixes switched up a lot, depending on who could play, but they all really came through.”
“Not too many people beat Hamilton Elks,” observed Camargo team captain Sally Layman. “We’ve been runnerup a few years in a row. I think we gave them a run for their money. We had them looking over their shoulders.” 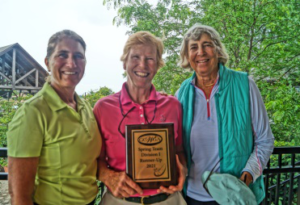 While the Elks win lent a feeling of familiarity to the event, this year’s Spring Team event also was marked by some shakeups, primarily in Division II. Jody Rusche, one of the former Elks players good-naturedly described by Coffey as “little traitors,” captained the Heritage team that won the division championship after being unable for several years to cobble together enough women to field a team. Heritage edged Four Bridges Country Club by 2.5 points.
“This was our first year back in, and we won, so that was nice,” Rusche said.

Rusche credited changes in membership with helping Heritage to be immediately competitive. “Our demographics changed a lot,” she said. “We have a lot more ladies who are good and wanted a little bit of competition and wanted to play. We’ve gotten a lot of new members who are really good. It’s kind of nice.” Like most of the team captains, Rusche never could be sure who might be available from one week to the next during the seven-week tournament. Heritage went into the last week trailing Wetherington Golf & Country Club by eight points while, essentially, leading the pack since Wetherington was hosting the finale and wouldn’t be able to compete or generate points. Four Bridges was five points behind Heritage. 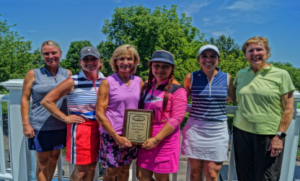 “Thank goodness we played well against Hyde Park in the last match,” Rusche said. “I was telling the ladies, ‘We’re leading by five, but don’t lay down.’” Rusche was particularly impressed with and thankful for the contributions of all her team members. By virtue of their finishes, Heritage and Four Bridges both will move up to Division I next spring, but both teams will have different looks. Four Bridges team captain Tereza Riccella had moved her membership to Heritage by the time the last Spring Team match was played. “I had dual citizenship for a while,” she said with a laugh.

Her Four Bridges tenure certainly ended on a high note. While her team didn’t win, it piled up a remarkable 39.5 points in the finale to apply significant pressure to Heritage – her new home club. “Our girls made a run,” Riccella said proudly. “In Week Six, we defeated Heritage, 29-25. We gave them their only loss of the season. The last week, we played the ladies from Coldstream (Country Club). Our girls knew what we had to do. We had to play our best. Unfortunately, I couldn’t play. I was out of town attending a funeral. Our girls were rarin’ to go.

“All six of our women had played Wetherington, so there was a lot of course knowledge. We play them every year in a tournament called the Liberty Cup. They definitely pulled it out big. “I’ve been captain at Four Bridges for 11 years, so I have a lot of records and emails. I’m not sure if 39.5 points is a record, but I know the ladies were excited. They knew they had to go for every point, and they did a heck of a job.” Perhaps they were motivated by knowing that Riccella was stepping down as team captain. Denise Wareham will take over, Riccella said. “I finally got someone to take over for me,” Riccella said. “This was my farewell tour.” 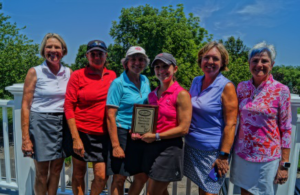 What the women savored the most was being able to get on the course for some friendly competition – even if the weather didn’t always cooperate. Coffey was asked what she enjoyed more – winning or simply playing. “Y’know what?” she replied. “I would say both. It was sad that we didn’t get to play last year.”

The pleasure of playing even helped the players deal with the challenging early season weather, Layman had to bring hand warmers to the first three events. “It was such a disappointment last year,” she said. “We were playing golf, but there were clubs that weren’t comfortable having people other than members come in and use their facilities. We all missed it. It was such fun to see everybody and have a little competition.”