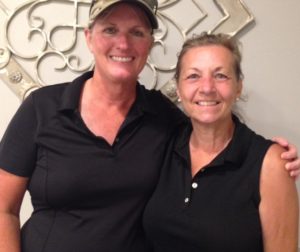 Golfers Toni Soule and Linda Coffey spent the good part of the morning preceding the Crystal Bowl Tournament worrying about the weather at Wetherington Golf and Country Club.

“We were worried the Crystal Bowl would get rained out. We checked the weather every hour leading up to the tournament,” Coffey said. “It ended up, we had a beautiful day.”

Coffey and Soule combined to win the 2017 Crystal Bowl Green Flight Low Gross championship with a score of 76.

The Hamilton Elks duo finished with a three-shot cushion over runners-up Liz Devine and Kathy Wallace, who shot 79 on their home course. Camargo’s Mardi Off and Lynn Schneebeck finished third with 80.

“We started off slow as I put my very first drive out of bounds and she missed her par putt,” Coffey said. “We regrouped on the second tee and played much better. I chipped a 25-yarder in for birdie on one hole and snaked a long putt in for a bird on another hole. Toni played very consistent. See kept us out of trouble by making par when I was nowhere to be seen.” 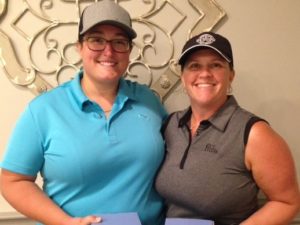 “I played in it several times,” said Coffey, who’s been involved in an administrative capacity as president of the Hamilton Elks Ladies Golf League and as a GCWGA executive board member. “Last time was in 2015 at Ivy Hills. I played with Toni Soule. We won low-gross then also. Our games are very similar. We had fun trying to outdrive each other and chipping it closest to the pin.”

First, they had to settle on attire. “We decided to wear our lucky outfits,” Coffey said. “Well, she said it was her lucky outfit and I wore the same thing so we looked like twins: black top and tan shorts.”

Fittingly, the duo finished on top while everybody else came up a little bit short. But there were many commendable performances throughout the field.

Hamilton Elks doubled down in the Burgundy Flight Low Gross competition as Sue Chow and Paula Gresham combined for 83 and the win. They finished two shots ahead of runners-up Christine Lenahan and Jeanne Robson (85) of Coldstream. 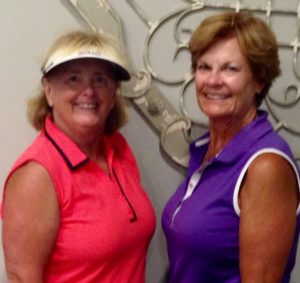 For Green Flight winners Coffey and Soule, it was quite a day that is merely part of a successful golf season for each as they tackle the GCWGA tournament schedule. Coffey placed third in the Low Gross standings at the Metropolitan Senior Women’s Championship with a second-day 78, tying for tournament-low.

Coffey and Soule were teammates as Hamilton Elks reclaimed the Spring Team Division I crown on the final day for a sixth championship in eight years. Hamilton Elks won each of the last three weeks to clinch the title.