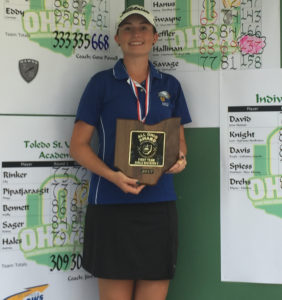 Katie Hallinan is planning to have a less busy summer this year than last, but the 2016 Women’s Met champion also is hoping to return for the 2018 event, scheduled for June 5-8 at Summit Hills.

“I haven’t quite worked out my schedule yet, but I’d like to play in the Met,” Hallinan said on April 17. “I always like playing in that tournament.”

Hallinan hopes to spend a little more time at home before leaving to continue her career and education at Illinois. She planned to be rooting in person for the Illini when they compete in the Big Ten Women’s Golf Championships at TPC River’s Bend course in Maineville April 19-22.

“I’m lucky,” said the Loveland resident, who plays out of Majestic Springs Golf Club in Wilmington. “It’s just a 10-minute drive from my house. It’s a great course.”

She also plans to spend more time honing her game for the next college season. She was, in fact on her way to practice at Lebanon’s Southwest Golf Ranch, which is co-owned by her long-time coach, Kevin O’Sullivan. She expects to focus on her short game, she said. “Mainly my putting,” she said. “I give myself a lot of opportunities that don’t translate to the scorecard because I don’t make the putt.”

Those problems haven’t kept Hallinan from building an impressive golf resume, to which she added last fall the Ohio high school Division I girls’ state championship. The Walnut Hills senior finished a record three-under par during the two-day, 36-hole event at Ohio State University. Her performance was the result in part of deciding in the seventh or eighth grade to focus on golf, giving up figure skating and Tae Kwan Do, in which she’d reached the black belt level.’

“I did some of the weird sports,” she said. “For five years, I was doing all three. I did tournaments in all three sports. I decided I had to focus on one. The older I got, the more I knew I had to make this decision to do one. I started thinking, ‘In 10 years, do I still see myself figure skating or fighting?’ I loved doing both, but I had to pick one sport where I knew I’d got the furthest in – where, if I put the work in, it could be great. Golf was the sport I could see my future in, especially after college.”

Hallinan has been playing golf since, as she recalled, she was 8 or 9 years old, when her father, Noel, started, as she described, “dragging” her to the driving range.

“I didn’t want to go,” she recalled. “They forced me to go to junior golf camps. I only found fun in it when I would win the little competitions. When I started winning more, I started getting more into it. It took a while, but it sort of evolved from there. I’m a pretty competitive person.”

A fractured right wrist, suffered in sixth grade during a recess soccer match, only slightly slowed her down.
“I was going to play a lot of tournaments that summer,” she said.

While expecting to cut back on tournaments this summer, she’ll more than make up for the down time once she begins classes at Illinois. Besides playing golf, Hallinan plans to major in molecular biology with a pre-med focus with the goal of becoming a pediatric oncologist. That’s been her academic focus since grade school, when she watched a classmate diagnosed with cancer keep getting worse until his treatment helped turn him around. “As far as I know, he’s doing well,” she said, indicating she checks in every once in a while on Facebook. “Ever since I knew what pediatric oncology was, that’s what I wanted to be.”

Still, she expects to face a difficult decision when she’s ready to graduate in four years. Stay on the medical path or try professional golf? “That’s a tough question,” she said, admitting to leaning now toward golf. “Of course, you know I want to, and that’s the goal. You can’t play this level of competitive golf without that goal. I told myself I’ve got four years to make that decision.” Luckily, she got used a decade earlier to making difficult decisions.