Margaret Jones hasn’t been back to Greater Cincinnati for at least five years, so she’s definitely looking forward to returning later this summer for the annual Legends of Golf Event, scheduled this year for August 16 at Hyde Park Country Club.

“It’s been so long that Fort Mitchell Country Club is on its second pro since the last time I was there,” she said with a laugh that was easily detectable over cellphones from her DeLand, Fla., home.

Jones 77, generously spent 20 minutes talking for a Greater Cincinnati Women’s Golf Association website feature on her career and life. Much of it centered on her local exploits.

Even from her Central Florida Orlando suburban home, Jones keeps a close eye on what goes on at Fort Mitchell, one of the area’s most tradition-rich clubs and the course out of which she played while dominating golf both locally and statewide and making a name for herself nationally in the 1950s and 1960s. She proudly points out that she was awarded an honorary life membership in 1975 after first joining in 1947 with her family.

Fort Mitchell has just as much reason to be proud of Jones. Playing strictly as an amateur, her list accomplishments is astonishing:

On the advice of her pro, Harry McAfee, Jones toned down her local competition to focus on national events. “He told me I shouldn’t play anything lower than the Met,” she recalled. 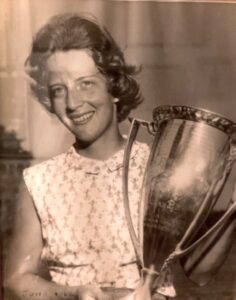 Jones grew up in a golf-oriented family. Her father, H. Charles, was a five-handicap player and a Fort Mitchell Country Club champion. Her mom, Loretta, was active in the Cincinnati and Northern Kentucky golf scenes. Loretta Jones served as President of NKWGA and then the GCWGA in 1960-61. Her older brother, the late Chuck Jones, played on the Wake Forest golf team and later won the Birmingham, Ala., city championship. He was inducted into the Birmingham Golf Hall of Fame.

Of all the events in which she competed before retiring in 1971 from competition, the one that’s left the deepest impression on Margaret was her first Met win for several reasons. In 1962 at 19, she was reportedly the history’s youngest Met champion. She also was the first from Northern Kentucky, but what she enjoys most is knowing how she won at Maketewah over Janet Craig. “Back then, the final round was 36 holes,” she recalled. “I was four-down after 18 holes, but I came back in the second 18 to win, 3-and-2. That made a great impression.”

She also recalls, though for a different reason, rolling to an 8-and-7 win over Craig in the 1963 championship match on Craig’s home course at Terrace Park. “I’ve always felt kind of bad about that,” Jones said. “She was one of the nicest people I’ve ever known, and that was her home course.”

In 1980, after the sudden death of her mother, Margaret Jones gave the GCWGA the “Loretta Jones Trophy” that is awarded to the Senior Met winner every year since that time. 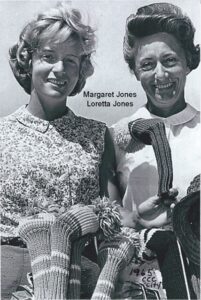 At the time of her retirement, Jones held course records at seven courses over five states: the men’s and women’s at Fort Mitchell, Brown’s Run in Ohio, Chicago Heights in Illinois, Stafford in New York, Pasadena in Florida and Big Elm in Kentucky.

While she was winning her first two Mets, Jones also was studying at Stetson University in Florida, majoring in education and playing on the men’s team because the school didn’t yet have a women’s team. She later became a counselor, first at Dixie Heights High School, where she guided the boys’ team to a third-place finish in the state. After moving to Florida, she became counselor at Seminole High School in Sanford, where one of her students was current PGA touring pro Matt Kuchar.

She also returned to her alma mater, coaching the Stetson University women’s golf team that had no scholarships to offer from 1991 through 1993 while also serving as the university’s first academic counselor to student-athletes. She remains active in her 51st year on the Women’s Western Golf Association Board and, on this day, was helping promote a virtual 5K run-walk to help raise money for a local social services.

“It’s a different world down here,” she said. “This is a nice college town in suburban Orlando. I still get out doing things outside. I haven’t abandoned the outside.” 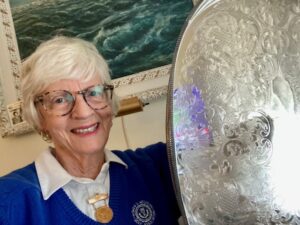 Degenerative disc disease keeps Jones from hitting the long ball. “I can still turn and hit the ball about 50 yards,” she said. “I’m mainly helping players for free on the “all important short game”.

She’ll feel at home at the August Legends event as she was named one in 1999, two years before she was part of the inaugural class for the Northern Kentucky Golf Hall of Fame in 2001.

Margaret Jones is truly a winner in women’s golf.

By Mark Schmetzer and Margaret Jones