“It is a big number. I think it’s slowly sinking in,” said Thompson, from O’Bannon Creek Golf Club in Loveland. “But I like to approach each event without looking back. It’s a new event every time. Let’s go get in it and see how I do.” 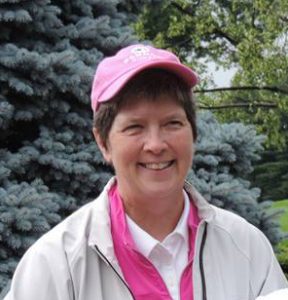 Thompson is doing quite well, thank you, and she means that. She shot a two-day score of 157 and won by a whopping seven shots at par-74 Columbus Country Club, which played over 5,900 yards. Kettering’s Tee Pazitney was runner-up at 164. Three Cincinnatians were in the top 10 at the June event. Janie Klare (166) tied for third. Nancy Reisert (172) tied for eighth.

“I played well for two days. It was a very difficult course and we played at a pretty long distance,” Thompson said. “I give many thanks to Kerry and Marianne Sahms at O’Bannon Creek for making me a better golfer over the years. They both have given me lessons.”

The Sahms’ star pupil played steady in windy conditions while vanquishing 59 golfers. Thompson was the only participant scoring under 80 and she did it twice, shooting 78 the first day then 79. She led by five after the first round. It was hers to lose. She won for the third time in four years, but it never gets old.

“Not for me. It’s part of the total journey. I don’t play every day, but I always try to get better,” said Thompson, routinely found peering over her putter on the practice green soon after a successful round. “It was very windy so that made it different. It was a challenge.”

Winning has been part of the playing formula for Thompson, who began her golf career by competing with the boys on the Loveland High School golf team. She won the 2003 NCAA Division III women’s individual national championship at Thomas More College, two Greater Cincinnati Women’s Golf Association Metropolitan titles, one Senior Metropolitan crown, a handful of other GCWGA events and 15 O’Bannon Creek club championships in 15 appearances.

Her tournament championship total has zoomed past 30 even though she’s president and owner of Thompson Gifts & Awards while being a leading golf advocate. Thompson serves on several local and state golf associations and boards of trustees. She’s in her second term on the GCWGA’s long-range planning committee.

Among Thompson’s other honors and accomplishments is recognition in 2009 as a Legend of Cincinnati Golf, participation in 17 USGA events with a win at the 2003 US Women’s State Team Championship with Emily Bastel and Heather Zielinski. That same year, she won the D-3 crown at Thomas More as a member of the working class 27 years after graduating from high school. Thompson has won the Ohio Women’s Golf Association championship three times.

At 58, she’s still going strong. Up next is her seventh appearance in the Women’s North & South Amateur Championship at Pinehurst in North Carolina. She also plans to play in a pair of local amateur qualifiers to the US Senior Women’s and US Four-Ball.