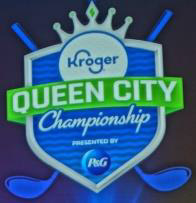 Sue Brainer had at least two reasons to be happy about the announcement that professional women’s golf will return to Greater Cincinnati. One was that, well, the ladies are coming back for the first time in more than 30 years. Another was that her home course, Kenwood Country Club, would be hosting the event. Less than a week after the announcement, Brainer had no hesitation about which was uppermost in her thoughts.

“I guess that the women are coming back,” the current Greater Cincinnati Women’s Golf Association president said. “For the GCWGA, our mission is to promote women’s golf and provide opportunities for events, and we also have a scholarship foundation that provides for the future of golf. “We’re very excited about this event and partnering with them. The opportunity to bring this event to the city was exciting.”

The Ladies Professional Golf Association announced on September 7 that the $1.75 million Kroger Queen City Championship would be contested at Kenwood Sept. 5-11, 2022. Procter & Gamble will serve as the presenting sponsor, and multiple workshops for female business leaders to develop networks will coincide with the tournament.

LPGA Commissioner Mollie Marcoux Samaan was on hand for the announcement, along with three-time LPGA Championship-winner Nancy Lopez and current tour member Lexi Thompson. Lopez has strong area connections. She was married to former Cincinnati television sports reporter Tim Melton and former Cincinnati Reds third baseman Ray Knight and she also won her three LPGA Championship tournaments while they were played at what used to be the Jack Nicklaus Golf Center at Kings Island, now known as the City of Mason Golf Center. She won her last LPGA Championship in 1989, which also was the last year the tournament was played in Greater Cincinnati.

“I kept thinking, ‘Gosh, this would be really great,’” said Lopez, a World Golf Hall of Fame inductee who now lives in Florida. “Cincinnati was one of my favorite towns. Playing in the LPGA Championship, living at Kings Island – just a lot of positive things here.” “Cincinnati has a long connection to the LPGA and its players,” Marcoux Samaan said. “We know this tournament will be a favorite stop on tour and serve as an important example of the power of sports to inspire leaders and build community. We are truly grateful to Kroger and P&G for supporting the LPGA in such an impactful and meaningful way.”

“Kroger is excited to bring the opportunity for the LPGA and its golfers to compete on this national stage to our hometown,” said Stuart Aitken, chief merchant and marketing officer and executive sponsor of the Women’s EDGE Associate Resource Group for The Kroger Co. “As a passionate supporter of the empowerment of women, I am personally inspired by the collaboration between Kroger, P&G and the LPGA to further their mission of empowering girls and women on and off the golf course.” 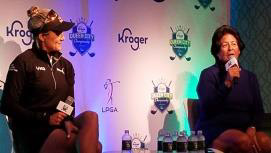 “We are thrilled to welcome the world-class athletes of the LPGA back to Cincinnati, and to inspire hundreds of local girls – and all youth – to play golf and other sports, realizing the lifetime benefits of the lessons and skills learned through sports,” said Debbie Majoras, chief legal officer for P&G and member of the U.S. Golf Association Executive Committee. “At P&G, we work to eliminate gender bias and create equal opportunity for all individuals, and so we also are excited to partner with Kroger and the LPGA to engage and empower more than 100 local women leaders from across our community.”

The Kroger Queen City Championship presented by P&G is owned and operated by Excel Sports Management, a marketing and management agency that has operated all four versions of Capital One’s The Match. “The Cincinnati community shows an unmatched passion for its hometown teams and sporting events,” said Kevin Hopkins, executive director of the event for Excel Sports Management. “Our goal is to create a really special experience for this fan base and make this world-class golf tournament a must-attend event on the Cincinnati calendar.”

The tournament is scheduled to be played on Kenwood’s recently renovated Kendale course and televised by the Golf Channel to more than 170 nations.

The area hosted the LPGA Championship tournament from 1978 through 1989. Kenwood previously has hosted several prestigious events – the 1933 United States Amateur, the 1954 Western Open and the 1963 U.S. Women’s Open. Althea Gibson, who won three consecutive Wimbledon tennis tournaments as well as Australian and French titles in the mid- to late-1950s, became the first Black woman to play in the U.S. Open at Kenwood in 1963. Mary Mills won the tournament by three strokes over Louise Suggs and Sandra Hayne.

“We take a tremendous amount of pride in hosting the LPGA here at Kenwood Country Club and can’t wait to showcase our beautiful golf course to the world,” said Denise Kuprionis, the first female president of the Kenwood Country Club Board of Trustees, who earlier this year was named the Top Private Club President in the Nation as presented by BoardRoom Magazine.

Brainer wasn’t actively involved in Kenwood’s pursuit of the event, but she knew that folks at the 91-year-old club were working on it. “This is something Kenwood has been pursuing for years,” she said. “We just finished the Kendale renovations. The GCWGA is excited and looking forward to being involved. “We’re just not sure about the parking,” she added with a touch of humor. They have a year to figure it out.