It’s not often that local golf enthusiasts can be within putting distance of the LPGA Commissioner without leaving Cincinnati but that opportunity exists 5:30 to 7 p.m. Thursday, Nov. 3 downtown at The Transept on Elm Street where Mike Whan will be the featured speaker.

Whan, a former Cincinnati resident, returns home for a celebration of Cincinnati women’s golf, an event hosted by The First Tee of Greater Cincinnati & Northern Kentucky. The Commissioner will be presented a TFT Core Values Award by local TFT girls golf participants. Whan is the eighth commissioner of the LPGA. He’s been on the job since Jan. 4, 2010. He’s scheduled to speak for about 15 minutes during a program that will last about a half an hour. Preceding the program at The Transept will be a cocktail hour with drinks and hors d’oeuvres.

The evening with Whan will pay tribute to Cincinnati’s rich history of women’s golf. On the docket is a five-minute video produced by Game Day PR featuring local luminaries such as Les Birdies founder Barbara Cooksey, University of Cincinnati golf coaches Carol Clark Johnson and Jan Carl, and Cincinnati golf greats Joan Comisar and Lynn Thompson. A running photo show will be featured throughout the cocktail party.

“The occasion is a great chance for us to shine a light on the history of (local) LPGA golf (including Kings Island), the strength of women’s amateur and recreational golf, academic golf and, of course, TFT’s part in introducing the next generation of girls golfer,” The First Tee of Greater Cincinnati & Northern Kentucky Executive Director Gale Wallmark said.

According to his LPGA bio, Whan, 49, developed a passion for golf at a young age while caddying and cutting greens to earn money. He went to high school in the Chicago suburb of Naperville, Illinois before transferring to local Anderson High School. He’s a Miami University graduate and a married father of three. He and his family live in Lake Mary, Florida.

Wallmark said the genesis of Thursday’s event began when The First Tee of Greater Cincinnati & Northern Kentucky invited Whan to be the featured speaker at a TFT Core Values Awards fundraiser March of this year. The invitation was extended by Charlie Mechem, a former LPGA Commissioner and a member of the TFT advisory council. Wallmark said Whan’s schedule precluded him from participating at that time, but the Commissioner expressed support and interest in the local TFT. He eventually came up with a date when he could return to his old stomping grounds.

“Although TFT-GCNKY is hosting the event and Mike is helping us launch our year-end appeal (Campaign for Kids), we thought his presence represented a bigger opportunity for Cincinnati area golf — and women’s golf in particular — so we approached the GCWGA, EWGA and Les Birdies with the “Celebrate” theme,” Wallmark said. “Our TFT chapter became an LPGA Girls Golf site in 2015, and that has enabled us to increase the percentage of girls in our program to 35 percent this year, up from 29 percent in 2015. At The First Tee, we think golf is a pretty singular sport, and we want to introduce it—and its inherent values—to as many kids as possible. We hope this celebration with the commissioner will generate interest among girls to give golf a try. Of course, we’d also like to show the Commissioner our considerable interest and support for bringing an LPGA tour stop back to Cincinnati.”

“We’re celebrating by coming together for this party, by taking a look back and forward, and doing it in the special company of the LPGA Commissioner,” Wallmark said. “It’s pretty incredible that the two most successful LPGA Commissioners—Charlie Mechem in the 1990s and now Mike Whan have roots in Cincinnati. We’re thrilled to be able to celebrate our rich history of women’s golf with Commissioner Whan and let him know how much we’d love to have the LPGA back here.”

Cost per person Thursday at The Transept is $50. Special $3 parking at Washington Park Garage is available. RESERVE NOW 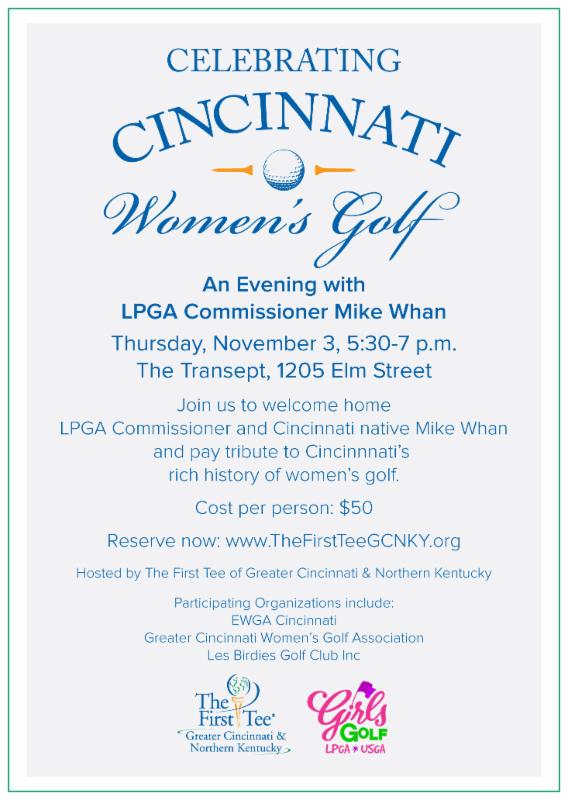