There were so many Cincinnati-area women making the trip to Perrysburg for last week’s Ohio State Amateur and Mid- Amateur Championships at Belmont Country Club that local legend Lynn Thompson had to take note.

The six-time Ohio Senior Amateur champion and two-time Cincinnati Metropolitan Amateur champ, one of the area’s leading advocates for local women’s golf, went straight to Facebook and sent out the word with kudos for area participants, including newly crowned Metropolitan champion Ali Green, a former Lakota West High School star who had a successful career at Ashland University.

It turns out that Markley wasn’t finished blazing a summer trail through her home state. That gave Thompson lots to talk about on Facebook with some excellent reporting from Perrysburg.

“Congratulations to Carolyn Markley of TPC Rivers Bend, St. Ursula alum, and soon to be junior at Michigan State,” Thompson wrote proudly. Then came the big news she had to share. “Carolyn was medalist in the qualifying round at the Women’s Ohio State Golf Association Amateur championship … She fired a solid 4-under 69 on a cool, breezy day.”

And, just in case local fans wanted to follow Markley’s progress, Thompson gave the details with the top seed’s ensuing tee times for match play. Markley was thrilled to be on the mind of one of her idols. 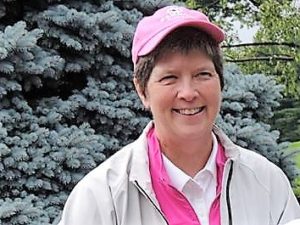 Both golfers did well at the match-play tournaments at Belmont while falling short of capturing championships. Thompson advanced to the Mid-Amateur championship flight semifinals before falling to Shirley Vaughn, who won 2-up. Suzi Spotleson beat Vaughn 1-up for the crown.

Markley advanced to the Mid-Amateur championship flight quarterfinals where she lost to Alyssa Burritt, a 5 and 4 winner. Ashley Au defeated Burritt for the title. Green, the fourth seed, and the 29th-seeded Hubbard faced each other in the first round with Green winning 3 and 1. Green was eliminated in the second round by Lexi Toth, who defeated Akiyama in the first round. Alsip, seeded 23rd, fell to Au in the opening round. Creager advanced to the second round of first-flight action.

It was Markley’s third Ohio Amateur. She made the semifinals on her first try. Like Thompson, she couldn’t believe all the locals who were teeing it up in Perrysburg, which is about 12 miles from Toledo.

“I like playing the Ohio Amateur,” Markley said. “I know a lot of people, a lot of from high school and college and people I’ve played with at other tournaments, who play in it. I saw at least a dozen people I know. And it’s a great tournament. It’s very well run.”

It was Markley’s fourth event of the summer. She also participated in the U.S. Amateur qualifier in Dayton and the U.S. Open qualifier in Muskegon, Michigan. “I was close (to qualifying) in Dayton,” she said.

Markley returns to Michigan State the third week of August.

“I played very well in the play-in round at the Ohio Amateur,” Markley said of her medalist performance. “I’m looking forward to carrying over the momentum at Michigan State and taking it into the season. I’ve done a lot of practicing this summer just making sure my game is strong, and it’s paying off.”