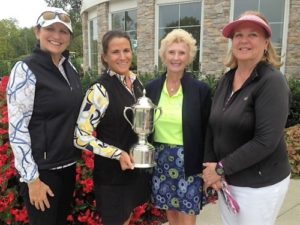 Weather cooperated. Players were in fine form. Tasty treats were available to eat and generosity abounded at the 9th Annual Scholarship for Higher Education Championship Tournament, making it a most enjoyable day for the GCWGA at Blue Ash Golf Course.

“It was a little chilly to start but then the sun came out and it was nice,” Koch said. “Donna (Drury-Heine) sent us some Blue Chip Cookies for lunch. Cinja Heis brought some mini Bundt cakes from Nothing Bundt Cakes before play. Everybody seemed to have a good time. Everybody was generous, and it’s for a great cause.” 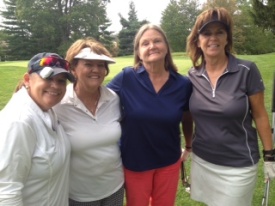 The SHE Tournament promotes and funds the GCWGA Scholarship Foundation which annually awards $1,500 one-time-only scholarships to a group of high school senior girls with an interest in golf. The GCWGA established the scholarship fund in 2006 to help local female high school seniors pursue higher education. Since its inception, 81 scholarships totaling $104,000 have been awarded to young women across the Greater Cincinnati/Northern Kentucky area.

“The SHE Tournament is our major fundraiser and it went really smooth,” Koch said. “It’s my third year doing it and it keeps getting smoother and smoother. Blue Ash Golf Course is a neutral site. They and our tournament committee do a great job with this. We made $400 more than we did last year from the silent auctions and raffles. And the tournament was very exciting. It was really close.”

The Hyde Park CC team took home the coveted SHE Cup with a score of 124, unseating champion O’Bannon Creek GC. The victory culminated months of qualifying over the length of the GCWGA season. The SHE Cup and bragging rights reside at Hyde Park for the next year.

Clovernook eked out a runner-up finish in a scorecard playoff with the defending champ.

Clovernook and O’Bannon Creek both scored 130. Each squad needed to save every shot due also to a hard-charging Miami View team.

Miami View wound up finishing fourth with a score of 132. Scoring was based on two net best balls of four. Each of the participating clubs determined its four lowest qualifying players at GCWGA Foundation Day Net Tournaments. Those low net qualifying events set the SHE Tournament field.

Nancy DeCenso of Terrace Park won the Closest to the Pin competition on holes 2 and 13.

More than $5,700 was raised for college scholarships. The event, which brings together dozens of women from member clubs, came complete with camaraderie, a yummy cookout, an awards ceremony, plus the silent auctions and raffles following golf.

Played on Sept. 11, there was a moment of silence dedicated to victims of the 2001 terrorist attacks. Former GCWGA president and Cincinnati Legend of Golf honoree, the late Jane DeGroff, was remembered for her dedication to the Scholarship Foundation on the 18th tee where tournament officials placed flowers and a framed picture of DeGroff. 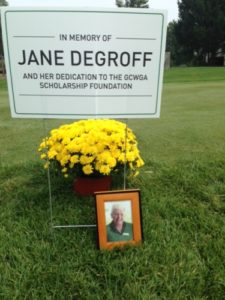 “Jane would sit near the 18th green and look for balls that landed where there was a blind spot,” Koch said. “We thought we would create a memorial for her to remember that.”

The SHE Tournament is complete but giving is ongoing. Private donations are accepted year-round at GCWGA Scholarship Foundation, 7998 Woodglen Drive, Westchester, OH 45069.