To say it was beginner’s luck would be inaccurate, since all of the team members have played golf for years, but for a few members of the winning teams at the 2020 High Kent tournament on July 21, their inaugural rounds at Maketewah Country Club proved to be particularly rewarding. 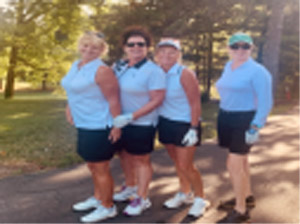 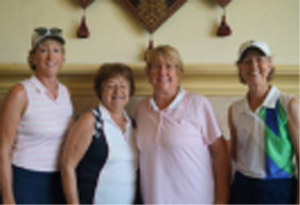 “We won by one stroke,” Kruse, the team captain, said. “The only reason I know that is I heard somebody from Kenwood say we lost by one stroke. I’d rather win than be in second place.

“We had no idea,” she added. “When you have a 14 on one hole, you’re like ‘Who’d a thunk it?’ When they started announcing it, we were like, ‘Oh, my gosh, we won.’ We were all completely shocked. It was great.”

The Lippmeier-Suarez team’s margin of victory was a more-comfortable six strokes.

The High Kent and its counterpart, the Low Kent, were created in the mid-1950s in honor of Mrs. Sydney B. Kent, and long-time Cincinnati Country Club and Women’s Western Golf Association board member who maintained in her life a keen interest in teaching ethics, courtesies and rules of the game to junior golfers. The tournament originally was a net best-ball foursome before evolving into flighted events at two different courses with gross and net prizes.

Patti Horne served as chairperson for both tournament. Kathy Brockman was assistant chair.

Steady play was the key to both teams’ victories, their captains said.

“Looking at our scores, everybody just played their own game and it worked,” Lippmeier-Suarez said. “Nobody stood out. Looking at our handicaps, that’s what our scores were. Of course Beth Gianetti was our best player, but I can’t say that anybody played lights out. We just kind of ham-and-egged it.”

“It’s really funny,” Kruse said. “We started off on the first with a 14 on a par-5. The girls were petrified. I told them, ‘One hole doesn’t make a tournament.’ We came back. Everyone took part in the win. We ham-and-egged it. It’s not like everybody scored really well. Two of us had 98s one 103 and on 113. I had a birdie on one hole that really helped. It worked out. It was just great. Three of us had never played that course.”

The Maketewah experience also was Lippmeioer-Suarez’s first, and she found the ample shade handy on a brutally hot day.

“It was hot, but there are a lot of trees, and that helped us get into the shade,” she said. “It’s very hilly. There are a lot of uphill shots. We started in the back, and there three par-5s in a row. I don’t think I’ve ever played a course like that.

“Really, we didn’t do bad on the par-5s. We had a couple of pars between us and a couple of sixes. That helped us. At least two of us played them well.”

“I loved the course,” Kruse said. “The greens were a little slow, which made it tough to putt on, but it’s a really nice course.”

Lippmeier-Suarez and Hjelm formed half of a Kenwood team that finished second to a Kenwood team of Captain Debbie Lach, Diane Herndon, Katie Robertson and Joan Roehr at last year’s High Kent tournament. She readily admitted that winning is better.

“Yes,” she said enthusiastically. “Yes, it is. You know what the best part is? I run the Kenwood Interclub Nine Hole. We’re competitive, but I just like making friends with these girls. It’s so much fun playing with each other. It’s exciting to excel with friends.

“Winning is one thing. Winning with my girls is better.”