A pair of GCWGA Fall Team play stalwarts rose to the top in the final standings of the late-finishing Division I and Division III competitions, making for some happy team captains.

Hamilton Elks captured the Division I championship in October with 147 points, good for a 36-point margin over runner-up Cincinnati Country Club (111). It was bunched up behind Cincinnati. Camargo (108.5) was third followed by Kenwood (104). Fewer than six points separated the next three: Miami View (95.5), Hyde Park (91) and Four Bridges (90).

“The Elks have won the last few years and we are honored to win this year,” captain Lori Roberts said. “We have a lot of very good lady golfers who love to play and compete.”

Coldstream won a championship for the second time in three years by capturing hotly contested Division III with a score of 109.5. Just 10 points separated second and fifth place while single points determined the destinies of the runners-up. 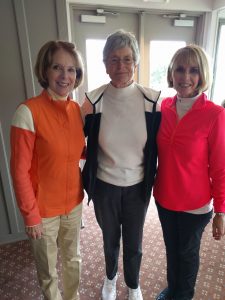 Clovernook and Summit Hills tied for second in Division III with 90 points but Coldstream and Clovernook will be moving up to Division II for the 2017 season, at least tentatively. They were followed in the Division III standings by Stillmeadow (89.5), Triple Crown (80), and Oasis (73.5).

“We lost two of our best players to other clubs and we did it with our own,” Coldstream captain Sue Detzel said. “We are pretty happy about it.”

The reward is a bump to Division II, where Coldstream and Clovernook tentatively join Hyde Park, Miami View, Four Bridges and Wetherington.