Each young woman was selected on the basis of academic achievement, excellence of character, and involvement in the sport of golf.

Across the Greater Cincinnati-Northern Kentucky area, 72 scholarships totaling $90,500 have been awarded since the inception of the Scholarship Fund in 2006.

The GCWGA looks forward to continuing our quest to encourage young women to play the game of golf. 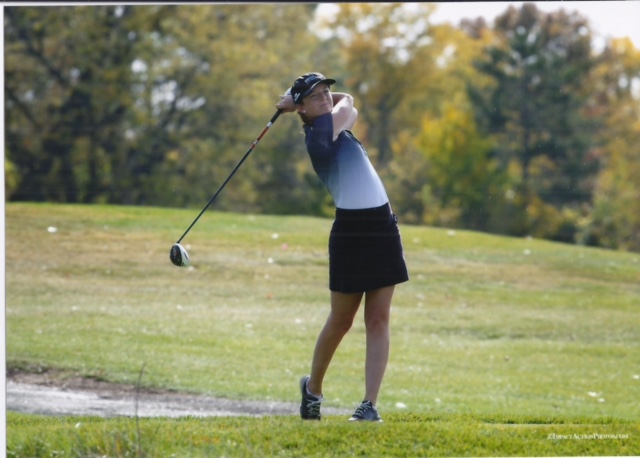 Kellen Alsip does not enjoy the spotlight.

Alsip fired rounds of 72 and 75 for a 147 total and a two-stroke victory over Jacinta Pikunas of Youngstown Boardman High School and fellow Cincinnatian Katie Hallinan of Walnut Hills. She became the first Sycamore golfer to win a state championship.

Alsip teed off on the back nine at Ohio State University’s Gray Course and played her first three holes on the second day of the tournament Oct. 24 bogey-par-birdie.

“After day one I thought I had a really good chance,” she said. “But I five-putted the par-three 13th hole and made a triple bogey. I thought I was done. I was digging myself out of that hole all day and really not paying attention to the other scores around me. I just focused on the course.”

She rebounded with three straight pars before taking a double on another par three at the 17th. But a birdie on 18 before making the turn set her straight. She played the front side one over par to claim the title.

Alsip huddled with her Aviator teammates after her final round and didn’t see the scores go up on the board in person, but found out soon enough she won.

“It was really overwhelming,” she said. “People were coming up and congratulating me, taking pictures, wanting to talk.

“When we got back to school on Monday, they had a walk of champions for us. We paraded through school and everyone came out of their classes to cheer. It didn’t really hit me right away how big of a deal it was. It sank in about a month after I won that I was really a state champ.”

Alsip parlayed her prep success into a golf scholarship to the University of North Carolina-Ashville. She plans to study engineering and chemistry with an eye toward medical research as a career.

She’s been working with Tim Lambert – director of instruction at Shaker Run and boys golf coach at Mason High School – to get her game in shape for a spring and summer of amateur tournaments.
Part of her preparation for college golf will be an appearance in the 101st Ladies Met June 20 to 23 at Western Hills Country Club.
She played in the 100th Ladies Met at Cincinnati C.C. last year and qualified for the championship flight where she lost in the first round of match play to her former Sycamore teammate and eventual champion Hanna Lee, who now plays at Xavier University.

“I really like match play,” Alsip said. “I kind of took that mindset of you can have a bad hole with me to the state tournament. It really helped me focus up there.”

Alsip started playing golf at age 7, tagging along with her parents at courses like Sharon Woods and Blue Ash. As she progressed in the game, Alsip eventually decided to give up volleyball – she played both setter and outside hitter – to focus on golf.

“It was the right decision for me,” she said. “With golf I could choose my own path with it. I didn’t have to rely on anybody to succeed or fail, just myself.”

101st Met – where history and the future meet.

Mark D. Motz is a life-long fan of Cincinnati golf. He caddied at Coldstream Country Club from fifth grade through college, attending Ohio State University and earning a degree in journalism via the Evans Scholarship.