It’s that time of year when the many-colored leaves separate from their branches and long shadows creep in earlier on the golf courses. Though warm playing conditions remain after the calendar flips from August to September, shorter days remind local players that the season’s competitive rounds are coming to a close.

The GCWGA Fall Team play schedule falls into that category with two more weeks of play in Division I and one more week of action in Division III. There are four playing divisions consisting of at least six teams for a total of 25 squads. Teams can move up or down a division depending on yearly results.

”Our final week is Oct. 7 in Division I because there are more teams,” Fall Team play chair Tracey Capuano said of the seven-team upper division. “We still have Week 6 and Week 7 to go. (Division III wraps up Friday, Sept. 30.) “It’s been a fun year.”

How could it not be? Each club has a pair of two-player teams competing in a handicap-scored match-play format. Holes are won or split. Weekly point totals accrue to a final team score with plenty of suspense in tow.

”For $40 a week, you get to play at the best country clubs in Cincinnati and there’s a luncheon included at the host club,” Capuano said. “Another thing that’s so great about fall play is at the end of the season you’ve got your skills. In the spring, it’s cold and you’re just starting and it’s a challenge.”

There’s fun to be had in the fall because GCWGA Spring Team play has proved to be so overwhelmingly popular. “Fall Team play has developed because of spillover from the spring,” Capuano said. “Spring Team is for the clubs’ lower handicap players. At some clubs there are more than 15 low handicappers. There are several low handicappers at Hamilton Elks.” 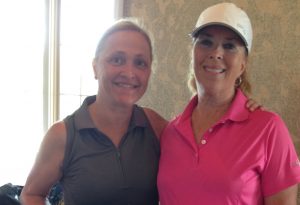 That can explain how Hamilton Elks is leading Division I with a 103 total for a comfortable margin over second-place Miami View (81). The Division I race appears to be for second place. Right behind Miami View is third-place Hyde Park (80.5). Next is Cincinnati Country Club (75), which won Week 5 with 22.5 points, good for a seven-point gain on Hyde Park. They are followed by Camargo, Kenwood and Four Bridges. The final two weeks are played at Miami View and Hyde Park.

The Fall Team play schedule has come and gone for Divisions II and IV, which wrapped up last week. There was a close race for first in Division II where champion Terrace Park edged runner-up TPC Rivers Bend by a half point (80.5 to 80). The six regular Terrace Park players among the dozen on roster include Division II chair Kathy Brockman, Cinthia Annett, Nancy Decenso, Janet Korach, Janice Kunkemoeller and Katie Blackburn from the Brown family which owns the Cincinnati Bengals. Wetherington (73.5) placed third followed
by Western Hills, Fort Mitchell and Bel-Wood.

Terrace Park clinched by winning Weeks 3 and 4 and tying for first Week 5. There was a four-way tie for first the final week. “It was kind of funny. The last week, (the top four) all scored 18 points. We could have shown up, not played and had lunch,” Brockman said. “We’re very happy. We want to move back up to Division I where we were last year.”

Losantiville (114.5) prevailed over runner-up Maketewah (100.5) in Division IV with a final-week score of 28. It was the only week won by the steady Losantiville squad, which had three weekly runner-up finishes. Losantiville players include Deb Altman, Sally Cuni, Ellen Greenberger, Debbie Henderson, Margo Ross, Susan Routh, Carol Sarver, Ellen Schaengold and Shelley Tarshis. Losantiville was followed in the Division IV standings by O’Bannon Creek (93) and Highland (90). Next were Wyoming and Heritage.