Judy Diem Hayes has compiled an impressive list of accomplishments in her 71 years of playing golf, but she needed 70 of them to log one of her proudest moments. Playing the par-3, 112-yard 14th hole on May 25, 2018, at Coldstream Country Club, her home course, Hayes pulled out her 7-iron and carded the first hole-in-one of her life.

“That’s my one claim to fame as I slowly fade into the sunset,” Hayes said recently during a phone conversation. “At age 80, I had my first hole-in-one and shot my age. The club gave me a huge plaque. No. 14 is a very slanted green to the left. You have to play it way up to the right, and for one of the few times in my life, I did it right. I was so excited, I could barely talk. That was a banner day. To some, a hole-in-one after 70 years might seem trite, but I counted myself very lucky to do that and shooting my age. I was so excited I could hardly swing.” 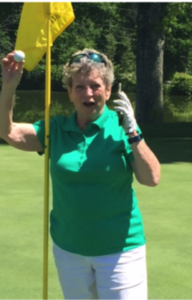 Hayes’s hole-in-one caps what has been an accomplished lifetime of golf. Since she started playing as a 10-year-old at Terrace Park Country Club, Hayes has won five Metropolitan Women’s Amateur Championship tournaments, besting five different women at five different courses over a span of 18 seasons, starting in 1959 at age 22 after just graduating from the University of Cincinnati’s College of Design, Architecture, Art and Planning.

Even more notable is Hayes’s dominance in her Met wins – after, that is, the first one. After losing in the finals the previous two years, Hayes cruised past 17-year-old Leslie Franz, 7 and 5, in the semifinals at Kenwood Country Club before holding off Kappa Alpha Theta sorority sister and 1956 champion Janet McIntosh to win the 36-hole championship match, 1-up.

She added a fourth trophy at Terrace Park in 1973, edging Linda Ludwig, 1-up, in the semifinals before beating former Withrow High School schoolmate Sandy Jones, 4 and 3, in the finals. Hayes never needed more than two putts that entire tournament. Hayes completed her run in 1976 at Clovernook Country Club, eliminating Jones with a 2 and 1 win in the semifinals before clinching her fifth championship with a 4 and 3 win over former Terrace Park partner Janet Craig in the championship round. Hayes, whose short game was her strength, sank a 15-foot putt from the fringe on the 12th hole to halve the hole and deny Craig any momentum.

Hayes considers that triumph her most memorable, mostly for a sentimental reason. “I played with Janet growing up at Terrace Park,” said Hayes, who married Bruce Diem after college. “She was a dear good friend who died very young. She died the following year. She was just a wonderful, wonderful gal and a good golfer. I can’t recall how many times she was in the finals, but she never won. She used to be so nervous about it.”

Hayes’s father, Charlie Anderson, introduced her to golf when she was 10 years old. He used to drop her off at Terrace Park in the morning, and she took lessons from pro George Bowden. “As I got older, I would practice in the morning and then play in the afternoon,” recalled Hayes, who started high school at Withrow before graduating from McNicholas. “Once I got to be 16 years old and was able to drive, I didn’t do as much practicing. I think I played my first Women’s Met when I was 12 at Kenwood. I was playing against older women, and I would call them all ‘Mrs. So-and-so.’ The next year, they told me, ‘You don’t have to call us Mrs. Call us Margaret or Olga.’ They were a friendly, friendly group. You were always playing against someone you knew or a good friend.” Her father used to follow her in her tournaments, but would keep his distance while trying to avoid being obtrusive. We used to laugh about it,” she recalled. “You could see him hiding behind trees, watching with binoculars.”

The 81-year-old Hayes, honored in 1997 as a Legend of Cincinnati Golf, spends a couple of months every year visiting her husband, Hal’s, family in Dallas and the rest of the year at their Anderson Township home, just around the corner from her long-time home course at Coldstream, where she’s won several club championships, the most recent in 2017 – a testament to her nature.

“I’ve always been very competitive,” she said. “That is my nature. Anything I do, I try to do my best. My father instilled that competitiveness in me, and it’s still there, to a degree. Now, I just enjoy being able to play golf at my age. I still compete at some level. When I won the club championship in 2017, the pro, Ken Kaiser, said it had been 20 years since the last time I won it. “As you get older, you’re just glad to get up in the morning, but I think I can still do it. That’s what keeps me going. That’s the part I enjoy now – just being able to play and play with friends.”