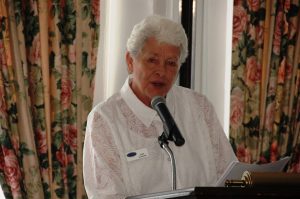 It is difficult to survey the Greater Cincinnati women’s golf landscape and not see Jane DeGroff’s influence. Her vision for local players and thoughtfulness displayed while helping Cincinnati build a successful women’s golf community was far-reaching. That’s why her sudden passing Friday evening following a heart attack at the age of 74 has those that knew her celebrating a wonderful life during a time of mourning.

“I was in awe of her. To me, she was the epitome of Cincinnati golf,” said Gloria Landry, who last fall succeeded DeGroff as GCWGA executive board president following DeGroff’s final term as association leader. “She won the Metropolitan. She was a big-time competitor. I got to know her when we were on the board together. It was very easy. We were at the Women’s Met together this summer. She was an honorary starter last year at the 100th Women’s Met. What a lovely woman. When you met Jane, you were a friend for life.”

Enshrined at Legends of Cincinnati Golf, the two-time Cincinnati Women’s Metropolitan Amateur champion and three-time runner-up went on to become a three-term GCWGA president and long-serving board and committee member. She was the 2016 GCWGA Spring Team Chair and a member of the scholarship foundation board. Among DeGroff’s many appointments, she was particularly effective as a rules official, course rater and long-range planner. When Carol Johnson, a top coach and teacher for the National Golf Foundation, was hired as University of Cincinnati’s first women’s golf coach in 1973, she hired DeGroff as her assistant. DeGroff eventually had a playing flight named in her honor at the Women’s Met.

Once a young competitor herself while growing up in Iowa and playing in junior girls’ and father-daughter tournaments, DeGroff had a penchant for encouraging up-and-coming golfers in her adopted home of Cincinnati by dropping them little hand-written notes. It all began after college when she took her first job in the area at the Hamilton YWCA as a summer camp organizer. Eventually, Lynn Thompson received a note from DeGroff, who liked to champion golfers that played the local tournaments every year, players such as Thompson, Linda Coffey and fellow Iowan Diane Calkins, who passed away last year.

“I’ve known her for 40 years. When you got a note from Jane, you knew it was special because she was thinking about you and wondering how you were doing. She was brief but very encouraging,” said Thompson, a former college champion at Thomas More who this summer won her sixth Ohio Senior Women’s Amateur championship. “We are so lucky that she found her way to Cincinnati and touched so many lives. Jane never sought the limelight. She just loved sports and was a great advocate for golf. In board meetings, she had an innate ability to have a vision and say it in a few words and gracefully steer it in a positive direction. It’s a shock she’s not with us. She’ll be greatly missed.” 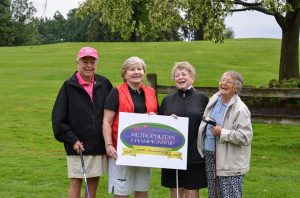 Memorial donations may be made to the GCWGA Scholarship Foundation, 7998
Woodglen Drive, Westchester, OH 45069.

The 1972 and 1988 Women’s Met champion was born March 8, 1942, in Mount Pleasant, Iowa, five days before her eventual husband was born at Christ Hospital in Cincinnati. Jane won father-and-daughter alternate shot tournaments as a teenager, studied at the University of Iowa and became a lifelong Hawkeyes sports fan. As a junior golfer, she qualified for the championship flight of the USGA National Junior Girls, Women’s Western Junior and Women’s Western tournaments.

She was a health and physical education major at Iowa and taught both subjects for 17 years at Northwest Middle School. She married Bob DeGroff in 1966. She starting playing the Women’s Met in 1969, beginning a 20-year run of 16 tournament appearances, nine times advancing to the semifinals. She was medalist four times and won several flight championships. Back surgery ended her participation in 1993. The DeGroffs became Cincinnati Bengals season ticket holders in 1970. September 3 is the date of their 50th anniversary. Jane DeGroff is survived by two children and a grandchild.

Bob DeGroff is a Greater Cincinnati Golf Association rules official, but the family matriarch was the top gun on the links. In addition to her GCWGA accomplishments, she won over 20 club championships. Jane was a member at Miami View Golf Club where she won the 1988 Women’s Met at the age of 45.

In addition to golf, Jane was an active member of quilting and garden clubs. Quilts she made were donated to Children’s Hospital for the care of newborn babies. She served on local and national boards of the National TTT Society, a non-profit philanthropic organization of women with chapters across the country focusing on providing an educational camping experience for girls who might not otherwise have the opportunity. She was busy, yet she rarely missed a Bengals home game.

“She missed fewer Bengals games than I did because I was with the Army National Guard for a while,” Bob DeGroff said. “She loved sports, especially golf. She liked to win and she liked to see others succeed. She never forgot a quote she read long ago in a magazine by a woman golfer who said in an interview that “a woman would rather burn her husband’s meal than lose a golf match.” That was Jane, and that’s the way she was with the association. She was basically there so women could enjoy playing golf, and play it right.” 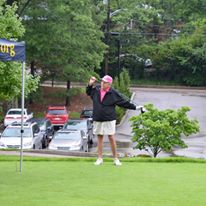