Allison Gonring’s 2022 Met Women’s Amateur championship might’ve come about with a move she made before the tournament’s first tee shot. 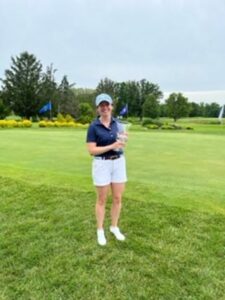 She played a practice round with Lynn Thompson.

Since both the Women’s Met and the Senior Women’s Met were played simultaneously on June 8-10 at Thompson’s home course at O’Bannon Creek Golf Club in Loveland, the move not only made sense, but it also paid off for both players. Gonring, the 2010 Met champ as Allison Schultz, shot a 75-72-75 – 221 to finish four strokes ahead of Eleanor Hudepohl, who also plays out of O’Bannon Creek.

“She was kind of giving me her little nuggets of wisdom,” Gonring said. “I listen closely when Lynn talks.” 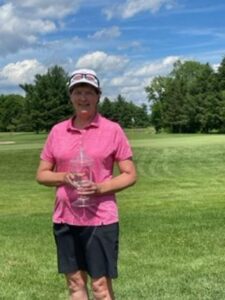 Thompson shot a 79-71 – 150 in the 51st Senior Women’s Met Jane DeGroff Flight to capture her third championship in four years, her fourth in six years and her eighth overall. She cruised to the title with a 12-stroke margin over defending champion Carolyn Mindel of Sharon Woods Golf Course.

Linda Leigh-Ross of Ivy Hills Country Club won the Diane Calkins Flight on her way to earning the Senior Women’s Overall Net championship with an 88-85 – 173. Other flight winners were:

Thompson is one title short of tying Marg Lillard and Joan Comisar for the most Senior Women’s Met championships since records started being kept in 1975. “That’s exciting,” Thompson said from Venice, Fla. “It makes me want to play next year.”

Gonring, who won the Met in 2010 after her freshman year at the University of Toledo, and Thompson turned in the only subpar rounds of the tournaments on the way to winning their championships. Gonring’s second-round 1-under 71 left her with a six-shot lead going into the third and final round.

“My game continued to elevate,” she said. “I was playing really well going in. I felt good, but you never know. Everything has to come together. After the first day, I was second by one shot. I felt good with a six-shot lead after the second day. That was new to me. It’s hard to play from ahead. I’m used to playing from behind.

“I didn’t check the leader board until the turn, and I saw I had a four-shot lead. I remember wishing it was six shots, but still, it was four. Then I hit some clubs I shouldn’t have, and all of a sudden, I was tied with Stipanovich. I went bogey, bogey, bogey, and my six-shot lead was gone. Losing the lead made my heart jump.

“I calmed down and started playing scratch golf. I made some really clutch par saves on 13, 14 and 15. Emily missed a birdie putt on 16 and I made a birdie putt. I took a two-shot lead with a birdie on the par-5 17. Emily went into the deep rough. She was in deep trouble. I put my third shot on the green and rolled in a 20-foot putt. She three-putted. I felt like it was over at that point, but I’m experienced enough to know anything can happen.

“On 18, I almost put my tee shot in the hole. That’s when I really knew. I kind of cozied it down from there.”

Gonring, who played in high school at St. Ursula, believes the O’Bannon course with its narrow fairways played to one of her strengths. “One of my bread-and-butter strengths is my accuracy,” she said. “I never get very wayward. The rough last year (at World of Golf) was really bad. It was really tough. I had to keep the ball in the fairway. Trouble like that doesn’t scare me. A lot of times, people I’m playing with comment, ‘Gosh, you’re really accurate.’”

Accuracy off the tee also was a key to Thompson’s win. “I drove the ball well, and on the second day, I putted a little better,” she said. “I tightened up my game. I haven’t played much competitive golf the last couple of years.”

Thompson admitted that playing on her home course gave her an edge. “You have to drive the ball straight to keep out of trouble, and I usually have good drives off the tee,” she said. “I guess that would play to my game.”

Intimate knowledge of O’Bannon Creek’s greens also helped, she said. “After 40 years, I know where to go if I hit the wrong spot,” she said.

“I felt like I was finally ready to compete with the best players,” she recalled. “It was match play back then, not stroke play. I beat Marissa in the final in 2010. I faced her again in 2011, and I knew she wanted to beat me, and she beat me on the final hole.

“I’ve played in the Met eight or nine times since 2011. I lived in Wisconsin for three year and I couldn’t play, but I played when I could. I really wanted to win. I grew up following it in the news. I always wanted to win the Met. It’s always been really exciting for me.

“Last year, I was leading after the second round, and I ended up finishing third. That one really hurt. I really wanted to win this one again. “I had tears in my eyes. This tournament means so much to me. It felt like a huge accomplishment for me.”