The Greater Cincinnati Women’s Golf Association has four possible championships in its annual Crystal Bowl competition. UnAe Mueller and Denise Wareham have teamed up to win two of them in the past two years.

After capturing the Crystal Bowl Flight One Net Championship at Kenwood Country Club’s 18-hole Kenview Course last year, Mueller and Wareham combined to win the Low Handicap Net Championship with a 73 at Hamilton Elks Golf Club on August 9. “We play together pretty often,” Mueller said by phone on August 12. “Because of that, we have a lot of confidence in each other. It was a pretty awesome day. The Elks is a challenging course.” 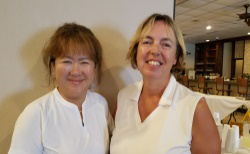 The Mueller-Wareham team won by four strokes over the teams of Linda Coffey and Toni Soule and Lynn Thompson and Nancy DeCenso. Vicki Felver and Hilda Hodges, playing on their home course, combined to win the Flight One Low Net portion of the tournament with a 62, just ahead of the 64 posted by Sue Brainer and Beth Gianetti.

The Triple Crown Country Club team of Rita Brick and Jane Taylor (no photo) earned the Flight Two Gross title with an 86, edging Sue Chow and Paula Gresham’s combined 88. Kenwood Country Club’s team of Sally Proffitt and Melissa Wink finished first in the Flight Two Net standings with a combined 65, also two in front of the 67 logged by Rhonda Logeman and Beth Wright.

The Crystal Bowl tournament was the conception of one of Cincinnati’s pioneers in women’s golf. Martha Parker Wilson came from a golfing family, won the Camargo Club Championship in 1951 and 1952, and played in the city championship from 1937 to 1957. She was a devoted member of the GCWGA, serving on the Board from 1949 through 1951 and again in 1956 and 1957. At the fall meeting of the GCWGA in 1951 she suggested that a two-man team from each club playing in a best ball tournament would be “interesting for the 1952 season.” The tournament was a success, was named the Crystal Bowl in 1957 and has grown into one of the GCWGA’s more popular events.

Mueller and Wareham suspected almost immediately that they might be in for a good day. Starting on the par-3 No. 5, Mueller’s tee shot landed close enough to the pin that many thought it was a hole-in-one. “It was a foot from the pin,” she said. “On the next hole, I made par.”

That sparked a red-hot start for the pair. Wareham birdied the next three holes. “She and I had a total of five birdies,” Mueller said. “It was a unbelievable day. We were kind of really amazed at how we played. If one of us had a bad hole, the other one picked us up. We’ve played the Elks on and off, so we know the course. We played our best game. We were making birdies left and right.

“I was hitting my driver pretty good – solid and accurate. Actually, my pitching wasn’t good, and my putting wasn’t good. I missed two or three 2-foot putts, but Denise picked me up with the putting. Hamilton Elks greens were hard and fast, and her putting was right there. I would get to the green, and Denise would take care of the green side.” Mueller and Wareham actually were surprised that they won the Gross title.

“We thought we maybe might win the Net,” she said. “We turned in our scorecard and people were coming out to congratulate us, and we were like, ‘What do you mean?’ They were saying, ‘You haven’t been outside?’”

Like Mueller and Wareham, Taylor and Brick thought they had a better shot at their flight’s Net title than the Gross. “Rita and I were setting up lunch, and we thought the only possibility we had was Low Net,” she said. “When they announced the winners, we weren’t one of them. We were getting ready to leave when they made the announcement that we’d won Low Gross. We were surprised.”

Unlike Mueller and Wareham, Taylor and Brick didn’t get off to a good start. “Our approach shots to the greens wouldn’t stay on the green,” Taylor said. “When it got on to the green, it would roll to the back. On our fourth hole, Rita made the adjustment to hit to the front of the green and let it roll back. We did really well after she made that adjustment, thankfully. While making the adjustment, we started out with two net bogies.

“We ham-and-egged it pretty good,” added Taylor, who celebrated a second career Crystal Bowl event win. “When I had a bad hole, Rita had a good hole. Rita’s the better golfer of us two. She did really well on the back. Again, it was a team effort.”

Playing at the Elks made the experience even more enjoyable, Taylor said. “I thought the course was in great shape,” she said. “Neither of us had ever played there before, which is always a challenge. The first time you play a course, you want to come back and play it differently. I thought the staff was well-organized.” “The course was in good shape, and the food was awesome,” Mueller echoed. “Congratulations to the Elks.”