She and her Four Bridges Country Club teammates – Ali Green, Diane Bizzarri and Denise Wareham – helped her on June 13 to form a better memory. They teamed up to get past the team of Lynn Thompson, Holly Jones, Diane Meiners and Nancy DeCenso and win the Low Gross portion of the Greater Cincinnati Women’s Golf Association Low Kent Memorial tournament. 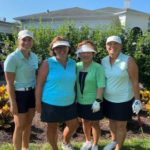 “This is the biggest event I’ve ever won,” said Mueller, who served as team captain and admitted she didn’t remember their margin of victory. “I don’t remember exactly. I was nervous. That was my first time playing in the Low Kent, and I never thought we had a chance to win because of the number of great players. We just planned to do our best, have fun and enjoy a beautiful course.”

“When they told us we won, I was like, ‘Oh, really? We won? No kidding?’ That was my reaction. It was totally a shock to me.”

Officially, the Four Bridges crew finished with a 152-163 advantage. 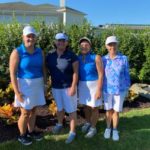 “That’s what happens when you play on your home course,” said Reperowitz, the winning team’s captain.

The win was the second straight for Doyle and Hartoin, who played on last year’s Low Net winners at Heritage Country Club. Thompson, a former Met champion, Jones and DeCenso were part of the team that captured the Low Kent Gross title last season.

The Low Kent and its counterpart, the High Kent, were created in the mid-1950s in honor of Mrs. Sydney B. Kent, and long-time Cincinnati Country Club and Women’s Western Golf Association board member who maintained in her life a keen interest in teaching ethics, courtesies and rules of the game to junior golfers. The tournament originally was a net best-ball foursome before evolving into flighted events at two different courses with gross and net prizes.

The High Kent is scheduled to be played on July 21 at Maketewah Country Club. Patti Horne is the chairperson for both tournaments with Kathy Brockman serving as assistant chair.

Mueller credited her team’s consistency as being the key to their win.

“Fortunately, we all played well and everybody contributed equally to the win, I think,” she said. “Everybody played to their own handicap and played well.”

It helped that Green, the 2017 Met champion, played to her single handicap.

“That’s why we had a chance,” Mueller said. “I believe she had three birdies. She’s a really good player. When she got into trouble, it was amazing to watch her get out of it. You’d be like, ‘Oh, well,’ and the next thing you know, she’s on the green. It’s just really fun to watch her.”

Just ss Mueller credited Green with leading their team to its win, Reperowitz unabashedly credited Mayborg, an Ursuline Academy graduate who plays at the University of Cincinnati, with carrying her team to the win.

“We had college girls on our teams,” Reperowitz said. “Both drove our teams. The rest of us on our team, I would say, were mildly disappointing, but between the four of us, we did enough. People just needed to have one or two good holes here and there.”

Mueller’s now more-pleasant memories of Western Hills were enhanced by the hospitality and atmosphere of the day.

“We’re so lucky to have one of the nicest courses in Cincinnati,” she said. “I love Western Hills Country Club. It’s beautiful, but it’s challenging. The course was very well kept. Everyone at the course was friendly and helpful. Those people did a great job on it.

“We were unable to have a shotgun start, like we normally do,” Reperowirz said. “We had tee times. Two people could share a cart. We kept rakes on the carts. The flagsticks couldn’t be touched. They had to stay in the holes. If you were anywhere in the clubhouse, masks were required.

“For the most part, what was great is we had a renovation about five years ago. We expanded our outdoor porch, so we were able to keep our food and beverage services outside. The pro shop has been very diligent with maintaining COVID restrictions.”

Reperowitz was gratified to hear of Mueller’s glowing tributes to the club’s hospitality.

“We’re West Siders,” Reperowitz said. “We’re pretty much down to earth. We’re happy to have guests.”