Sally Leyman is as realistic as the rest of the Greater Cincinnati Women’s Golf Association members who participate in the annual Spring Team competition. Leyman is captain of the Camargo Club team that edged Miami View by a half point to finish second in Spring Team Division I play, 19 points behind perennial-champion Hamilton Elks, which has become so dominant that the rest of the field has adopted a new approach to the competition. 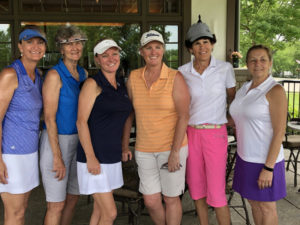 “We like to call it first place for anybody not called Hamilton Elks,” Leyman said. “We’d like to think we can compete with them, but they’ve got a great team and they show up to play every day.”

Camargo edged Miami View by exactly a half-point, 170, 169.5, to finish second in Division I. The O’Bannon Creek Golf Club team came from behind in the fourth week of the five-week Division II schedule to vault into first place and held on to win the Division II championship.

“The captain of the team had a great team to be a captain of,” Kyle Earhart said of her O’Bannon team, which held off Summit Hills to win by 5.5 points. “The hardest job was working my way through the cancellations. Every match was played either in wet conditions or rainy conditions. There was only one match when it was partly sunny, and that was on a makeup date. “My ladies are really tough ladies,” she added. “They can weather any storm.”

The season’s incessant rains wreaked havoc on the Spring Team schedule, but both divisions were able to complete play by the end of May. Hamilton Elks won Division I for the third consecutive season, the sixth in the last seven years and the eighth in the last 10. Their 19-point margin of victory almost doubled last year’s 10-point margin, leaving Camargo and Miami View to battle it out for second. Camargo ranked fifth among the seven teams as late as Week Four of the seven-week event and fourth in Week Five before leapfrogging to second place with an impressive team score of 33 points in Week Six at Kenwood Country Club. “I think, that day, we had people play well,” Leyman said. “They played well on that course.” 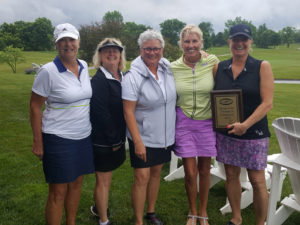 Leyman believes the seeds for Camargo’s success were planted in Week One at Western Hills Country Club, where her team scored 28.5 points to finish third, three ahead of Miami View, despite deploying a cobbled-together lineup that included a team of sisters-in-law playing their first team competition.

“We had a whole lot of people out of town,” she said about teaming Aggie Boswell and Ellen Schiefer. “I figured two bodies were better than a forfeit. I always tell our team that every half-point counts. Their handicaps were easily 10 strokes higher than the Miami View team. I felt like I sent them to the wolves. I just told them, ‘Do what you can do.’”

Leyman teamed herself with Martha Lindner against another Miami View team that included what the Camargo captain described as a “lovely, young, really good golfer who has a scratch handicap and played for (Northern Kentucky University).” “I told my partner, ‘If we get three, we’re doing fine,’” Leyman said. “Five of our six players got 9.5 points that day. Those small victories eventually pay off. What got us off on the right foot was that first match.”

Like the Camargo team, O’Bannon was languishing in third place going into Week Four of the five-week Division II competition before taking over first place by racking up an impressive 35 points at Clovernook Country Club.
“We played really well that day,” said Earhart, who had to work most of the season without O’Bannon’s top two golfers. Janie Klare was sidelined with a ankle injury. Work limited Lynn Thompson’s contributions to one stop, but that was at Clovernook. O’Bannon also was boosted by the play of No. 3 Holly Jones and the return of its No. 4 player, Jennie Haralmos, from a partially torn Achilles tendon. 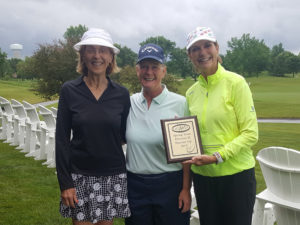 “She’d been out of commission since September,” Earhart said. “This was her first time playing 18 holes. “The captain was gone that day,” Earhart added. “See how well the ladies did without their captain?” O’Bannon’s win means a move up to Division I next spring – not the first time the team has earned a promotion. “Usually, what happens is we move up to Division I and we struggle because we don’t have the dominant players,” Earhart said. “We couldn’t hang with the big girls. It’s interesting. In Spring Team, you have a roster of like 25 women who are eligible and you have to take players by how they’re numbered. Sometimes, you have your No 19 playing a No. 5 or 6. Spring Team is kind of hard because, some weeks, you’re low on players. That’s how we were in the first three weeks. People were just getting back from Florida or were on vacation. “Now, we’ve gotta go play with the big girls. I think we’ll be able to hang with them if everybody stays healthy and in town.”