Diane Stevens was just relieved. Rottinghaus was captain of the Miami View team that rolled to an impressive seven-point win over Kenwood in the 2019 Fall Team Division I tournament. Miami View took the lead in Week One of the five-week tournament, taking advantage of playing on its home course, and pulled away over the next month, but what the title-winning team found just as sweet was finishing ahead of perennial powerhouse Hamilton Elks, the defending Fall Team champion and the 2019 Spring Team winner. 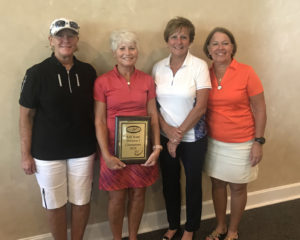 “What a feat,” Rottinghaus exclaimed. “We beat the women of Hamilton Elks. We’re really excited. Usually, instead of thinking about winning the whole thing, you tend to go in trying to finish second.” Rottinghaus pointed out that it’s all in fun.

“We do love those women,” she said. “We all know them. It’s competitive, but it’s also fun.” Wetherington moved into second place in Week Four of the Division II event and capitalized on a Western Hills off day in Week Five at Clovernook to edge Clovernook, 94.5 points to 94. Clovernook won the day, 22 points to 21.5, but that wasn’t enough to overcome Wetherington’s one-point lead going into the final day. “We did what we needed to do,” team captain Stevens said. “We had a lot of ups and downs this season. It was pretty awesome.”

The teams from Maketewah and Oasis each enjoyed blistering 25.5-point rounds on the way to winning their division championships. Maketewah produced its impressive performance in Week Three of the Division III tournament to take the lead and padded it with a solid 24 in Week Four.

“We did start off very slowly,” Maketewah captain Robin Kofler said. “In Week Three, we played against Ivy Hills. My No. 1 player, Susie Hammett, really ham-and-egged it. I played with her that day, and she was just lights out. Susie’s short game was really on, and both of us were putting lights out. Carol Ayers and Nancy Morrissey did a great job as well. They had a great round.

“Week Four, we were very fortunate. That was our home course. That was one of those days when everything was in our favor. We were putting well and hitting long fairway shots. We were just on it.” The Oasis team, captained by April Rockwood, took the early Division IV lead with a 25.5-point first round, but the ladies still needed a 21.5-point final round and a Triple Crown off day to come away with a 98-95 win. What Rottinghaus considered to be Miami View’s turning point came in Week Three with a win over Coldstream at Hamilton Elks. She was out of town and had to keep track by remote.

“I was back-and-forth with my women and kept telling them, ‘We can do this,’” Rottinghaus said. “My No. 2, Debbie Driehaus, was our No. 1 that day, and she might’ve shot an 84. She would never admit it. I’m sure she would say it was a team effort.” “We played (Tournament Players Club) in the last match. They had played well during their matches, too. We just had a good match.”

Wetherington’s key outing might’ve been Week Four at Stillmeadow. The team finished with a round-best 20.5 to pull within 1.5 points of Western Hills. “None of us had played there before,” Stevens said. “It’s a tough course – a lot of hills. It was just hard. “Honestly, it really was a team effort,” she added. “I can’t say that one person kind of did it all. We fought hard for every half-point.”

Even though Maketewah was in front going into the last round, the players still were nervous. “We felt very confident,” she said. “We have a very competitive group of ladies, but we were a little nervous. We were going to be playing Wyoming on their home course the last match. We were nervous, but we were ready to play. My team won the first hole, but we lost the next three, and we were thinking it wasn’t going to be a good day.” They did just enough to hold Ivy Hills for a three-point win, which was made even more satisfying after they moved up from Division IV with a runnerup finish last fall. “Oh, very much so,” Kofler said.

“I was out of town, but I heard all about it,” Stevens said. “Our ladies’ golf leagues are really strong here. We have a lot of active participants and they’re getting into the sport and loving it., We just have a really good team. We’re encouraging ladies to get out and play other events. It’s really nice.”