Winning the Crystal Bowl High Handicap Net competition was so unexpected that Connie Toole felt compelled to confirm it.

She checked in with the duo with whom they’d played the Coldstream Country Club course.

“I even asked them later, ‘Can you believe we won?’” said Toole, who partnered with Diana Oberschmidt. “They said, ‘Well, you did hit the ball well.’” 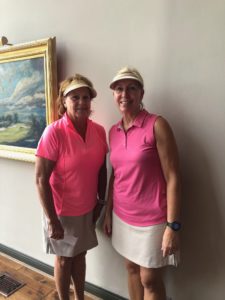 Toole and her Ivy Hills Country Club partner played well enough to edge the teams of Judy Wolter and Barb Goila and Susan Danseraeu and Carolyn Ayers by one stroke and Lisa Consolino and Debbie Lach and Sharon Adowd and Julie Zennie by two in the annual event, played this year on August 13.

That was the closest of the four levels in this year’s best ball event. Playing out of Miami View, Judy Haverkos and Lynn Torbeck bested the team of Diane Rottinghaus and Amy Lambrinides by three strokes in the High Handicap Gross scoring.

The Hamilton Elks Golf Club swept the Low Handicap events. Toni Soule and Linda Coffey combined to run away with the Gross championship, winning by 5 strokes, while Lori Roberts and Tina Davis teamed up to edge the team of Toni Matheny and Terri Proud by two strokes in the Net division. 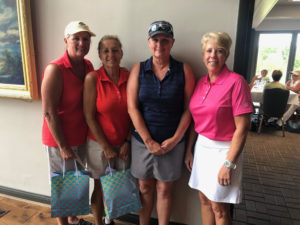 “The cool thing is Tina is my twin sister,” Soule said. “She’s a lefty, so we’re mirror images of each other.”

Toole and Oberschmidt, a former Greater Cincinnati Women’s Golf Association president, were just happy to be playing the popular Crystal Bowl after missing out last year.

“Last year, we were shut out at Camargo,” said Toole, who previously won with Oberschmidt a Crystal Bowl Low Gross title. “Everybody likes to play in it. This year, Diana was right on the ball and got us in. Diana has played at Coldstream several times. I had never played there before. They have large fairways and large greens. It’s a beautiful course. For the most part, we were able to keep the ball in play. I heard it’s a tough course, and I expected a lot of trees and water.

“You always remember the holes you played badly. Those are the ones that stick in your mind. I thought we had no chance. We were a little hopeful of finishing fourth. You always think, ‘If we’d played one more hole better or made one more putt, we’d have won it.’ We did it.”

“We were standing in line for lunch,” she added. “Diana knows a lot of people. Somebody came by and said ‘They’re still figuring out the scores, but I think you won a prize.’ We were like, ‘No way.’

“The very last thing they announced was High Net. We were on the edge of our seats waiting to hear. We couldn’t believe it. We were so happy.

“Overall, it was a wonderful day. The event was well-managed. The golf course was in excellent condition. The weather was supposed to be iffy, but it turned out great.” 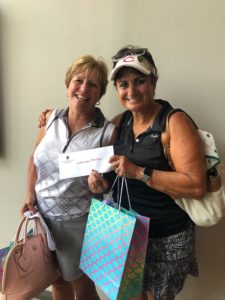 “We’re both fairly long hitters, and we were able to get on when we needed to,” Soule said of she and Coffey, who’ve won three Crystal Bowl events in four tries. “We ham-and-egged it. Luckily, we didn’t have to play any hazards.

“It had been some time since I played it, but once I got back there, I started to remember the holes and how long it is. I do love that course, though

“We felt pretty good that day,” she added. “Coldstream is long, and we knew it would play longer since it had rained. When it’s dry, it’s tough enough. With wetness, it was tougher. We started on the back side. We were a little shaky at first. It was a little wet at first, but at the turn, it dried up a little bit.”

Toole and Oberschmidt had the same experience, which produced an interesting phenomenon.

“The greens were lightning fast when they were wet,” Toole said. “As they dried out, they were slower. Maybe it was the bent of the grass or something.”

Coldstream’s conditions also favored the team of Roberts and Davis.

“We were fortunate to play well that day,” Roberts said. “The course was playing pretty long, and Tina and I were able to take advantage of the distances. Luckily, we didn’t have to play any hazards. I don’t know Toni and Terri’s games that well, but I know we probably hit longer balls. Both of those two are very nice golfers.”

Torbeck was almost as happy to not lose a ball to Coldstream’s numerous water hazards as she was to win the High Gross competition with Haverkos.

“Judy played very strong,” she said. “She was very consistent. We both played to our handicaps. We both started and stopped with the same ball. It was awesome to not lose a ball to the water. At Coldstream, every par-3 has a water hazard in the front.”

Torbeck had one other point of pride.

“On one of the par-3s, I had an exceptional putt that gave us a birdie,” she said. “The putting greens at Coldstream are huge. On Hole No. 14, I had a long putt from the back of the green. The greens are large and – what’s the word I’m looking for – oh, yes, undulating. The flag was in front. The ball was all the way in the back. It was interesting. The ball slowly kept going and going and going.

“It was the highlight of my day – other than the win.”