(First in a series leading up to the 102nd playing of the Metropolitan Amateur Championship June 12-15 at Terrace Park Country Club.) 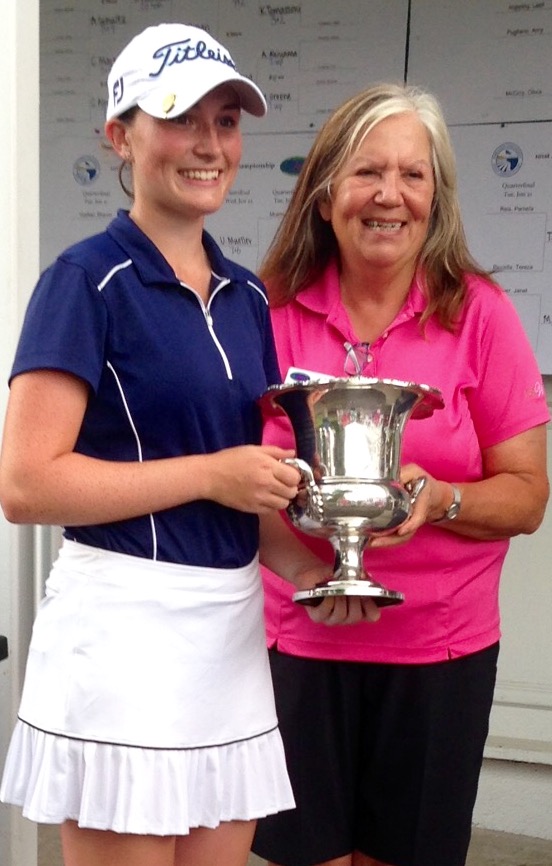 Katie Hallinan knew that her 2016 Women’s Metropolitan Amateur Championship victory was a momentous occasion as soon as she captured the crown with the aid of some of the greatest recovery shots of recent vintage at the century-old tournament.

Hallinan later found out that it was also a big deal to many of those around her, including family, friends and fellow competitors.

“I don’t think there is a competitive girl in the city who wouldn’t give up a round of golf to play with Katie,” Walnut Hills coach Larry Klein said. “That’s how big it was.”

In one dramatic moment on the 18th green, capping a series of unforgettable approach shots in the match-play final at Western Hills Country Club, Hallinan accomplished many things while etching her name into local golf lore. A 16-year-old sophomore at the time, she became an instant sensation by rallying to beat collegiate co-finalist Katie Tomassoni 1-up. In so doing, she became one of the youngest city champions in Cincinnati history and the first from Majestic Springs Golf Course, all in her first appearance at the venerable city tournament.

Hallinan, qualifying co-medalist and the No. 1 seed, led the final just twice, after holes Nos. 6 and 18. But she was so effective, albeit in unorthodox fashion, heading to the greens on 17 and 18 that she wasn’t forced to putt against Tomassoni, the 1-up leader after 16. Tomassoni, the 10th seed from Mason High School and Tusculum College, watched Hallinan wriggle out of seemingly impossible jams on the last two holes.

Hallinan tied it on 17 with an improbable birdie after believing that she handed the crown to Tomassoni by pulling her tee shot left and placing the ball behind a tree line on the adjacent 13th green. Her high-arcing 100-yard approach shot landed on the fringe of the 17th green and rolled to within three feet of the cup. On 18, she once again drove left of the tree line, this time into the rough. She recovered with a blind, uphill 50-foot chip shot from behind a bunker that climbed onto the green, where it rolled to within two feet of the flag stick.

The steady Tomassoni, from Harmon Golf Club, drove the middle of the fairway on both 17 and 18. When her 15-foot putt for birdie ran past the cup on 18, she conceded the match to Hallinan. The last 16-year-old Women’s Met champion was Emily Wright, a one-time Wake Forest golfer who won in 2009 four months after her birthday; Hallinan won six months after hers.

“It was definitely a confident booster,” said Hallinan, an Illinois recruit. “I was never really ahead by a lot and there were so many ups and downs.”

Congratulations poured in all summer. When she returned to Walnut Hills for her junior year, teachers, administrators and students alike were still handing out kudos. “The recognition from everyone was incredible,” Hallinan said. But no one was incredulous. All those in Hallinan’s orbit, even the Walnut Hills security guard, knows that she has an out-of-this-world golf game for one so young. “The school security guard said, ‘You won the Met over the summer!’ I said I did,” said Hallinan, a straight-A student at Walnut Hills. “Everybody’s been so positive.”

Her big takeaway from last year’s big win has been an uptick in belief in mental approach. “I learned a lot about myself at the Met,” Hallinan said. “Just knowing that when I’m down, and it doesn’t look good, doesn’t mean it’s over. It’s not necessarily the case because now I’ve got the ability to stay composed and finish as strong as possible.”

Smart. But, that’s Hallinan, a Walnut Hills student tutor. She carries a 5.32 weighted grade-point average at the school, a college-preparatory house of knowledge regularly ranking among the top 100 in the country according to both US News and Newsweek. The daughter of a pediatric neurologist and a chemist, Hallinan envisions a career in pediatric oncology with a major in molecular biology or chemistry at Illinois.

But, first things first. She finishes the academic school year in May. She hopes to restart piano and voice lessons. She embarks on a busy spring and summer golf schedule taking her to far-flung locations as far away as Arizona, continuing a year-long theme.

She won the local high school girls’ sectional championship for Walnut Hills last fall, missing out on the state tournament by two shots at the district event just a few days after personally calling every one of the other 12 coaches who offered her a college golf scholarship. She was state runner-up as a sophomore. She finished the 2016 prep schedule 20 shots under par. She competed at the Arizona Silver Belle Tournament in December. She golfed in Florida over spring break. She’s in an American Junior Golf Association 54-hole national girls’ 18-under event in Goshen, Kentucky, April 21-23.

Right now, June’s 102nd staging of the Women’s Met at Terrace Park Country Club is not on her playing schedule. “Right when I think I’m busy, I get busier,” said Hallinan, who will miss attending the Big Ten Women’s Golf Championships this month at TPC River’s Bend, not far from her Loveland home, due to the AJGA event in Kentucky. “I may be caddying one day at the Met for a friend of mine, Leyton Brumfield at Ursuline Academy, if everything works out.”